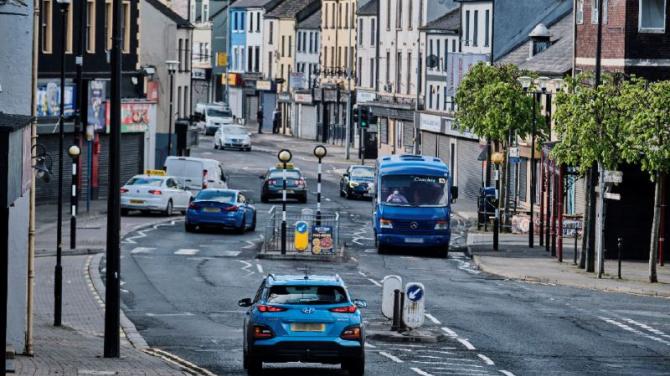 ASSURANCES have been given over plans for a major overhaul of Strabane town centre.

Concerns emerged last month that funding for the ambitious public realm scheme, which has been designed and granted planning permission, could have been in doubt as a business case has yet to be completed.

It's understood the Department for Communties (DfC), who is jointly funding the project, had requested further information around the links to the Canal Basin regeneration following the City Deal announcement.

The £7m scheme, which would represent the biggest cosmetic shake-up in the town for decades, has been devised by Derry City and Strabane District Council (DCSDC) in conjunction with consultants RPS, and will see a number of significant environmental improvements specifically around the area of Abercorn Square, Railway Street, Market Street and Castle Street.

Initiated under the former Strabane District Council, the project will see the replacement of the variety of footpath finishes on Market Street and Abercorn Square with new natural stone paving along with new granite kerbs and the existing street furniture across the public realm area will also be replaced to give a consistent appearance.

The project will also see significant improvements to a number of roads in the town centre and the creation of a new public space in Abercorn Square.

There will be a realignment of the traffic flows and improvements to a number of junctions and parking areas in and around the town centre area with priority given to traffic travelling between Market Street and Railway Street and a new junction for traffic wishing to turn onto the Derry Road.

Communities Minister Deirdre Hargey was asked for an update on the scheme by West Tyrone SDLP MLA., Daniel McCrossan.

Ms Hargey said her department is working closely with council as it seeks to finalise the details of the scheme.

"The business case for the Strabane Town Centre Public Realm Scheme is currently being finalised by the project promoters, Derry City and Strabane District Council," she said.

"Upon receipt of the final business case, my department will then consider the business case and associated funding approval in the context of the department’s wider budgetary considerations."

Mr McCrossan said he was concerned about the scheme and the apparent lack of funding commitment.

However those concerns have since been allayed following a meeting with Mr McCrossan and council officials.

Speaking after the meeting, he said: "This multimillion pounds scheme has been in the pipeline for many years and I’ve been actively pushing for its full delivery.

"Strabane town centre is in need of this cosmetic upgrade and public realm investment.

"I’ve been given assurances that this is of the highest priority and that we should see no further delays."

He added: "I’ve pressured that the scheme should have already started and should have started this year when the town centre was quiet due to COVID.

"I am relieved to be given the reassurance, but will continue pushing for its immediate delivery.

"This is a transformative scheme and will help breathe new life into the town we love so well."

"I sincerely hope DfC are not thinking of reneging on any of this promised funding because of the City Deal announcement in a move which would negate the benefit of that investment.

"To be honest, I have suspicions that the Riverine Project, funded by European money, could be used to allow regional and local government to shirk their responsibilities to Strabane when it comes to providing green areas.

"Strabane is playing catchup after decades of under investment. Any funding which is allocated to redress that imbalance must not be withdrawn because we get a 'bonus' from the EEC or City Deal.

"We are poor relations of practically every town in the North including Derry and we demand this £7 million pounds worth of investment be delivered."

Meanwhile, a spokesperson for council said: "We are currently working with DfC to finalise updates to the business case to reflect the announcement of the heads of terms for City Deal and this will be submitted to DfC in the coming weeks to enable the Minister to consider the project for funding and once the funding is announced we will move to delivery."