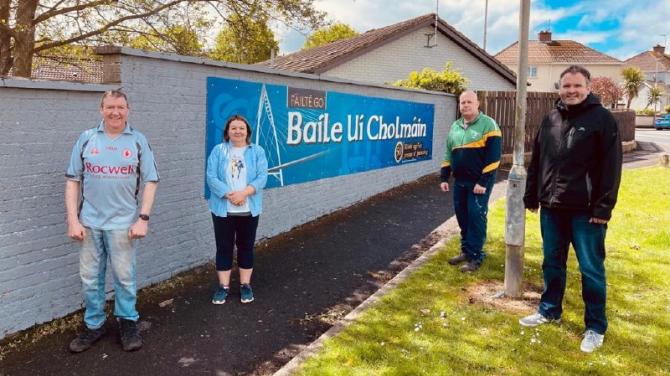 IT is 50 years since the first residents moved into the Ballycolman Estate in Strabane and a new billboard has been erected to mark the estate's '50 years a growing'.

The colourful and eye-catching signage was first conceived of when Sinn Féin party activists cleaned graffiti off the wall.

Local councillor Michaela Boyle explained: "In the course of painting over unsightly graffiti on walls in the estate, activists from the Jim McGinn Cumann were reminiscing about how it was 50 years since the first residents moved into the estate.

“A further discussion then developed about how it would be nice to mark this milestone in some way.

“From this emerged the idea for this eye catching billboard extending a positive message of welcome as Gaeilge (in Irish) and in the wording ‘Fiche Bliain ag Fás (50 Years a’ Growing)’ a celebration of the strong sense of community and community spirit that has that has been defining feature of the Ballycolman Estate since day one."

She continued: "The 24ft/4ft billboard was located on the wall beside the transformer so as to be visible to everyone entering from the Ballycolman Lane side and so that this bright and welcoming image would be seen instead of a drab wall with graffiti.

“Sadly many of the original residents of the estate, who contributed so much to making it the ‘place apart’ that it is, are no longer with us but their positive legacy lives on."