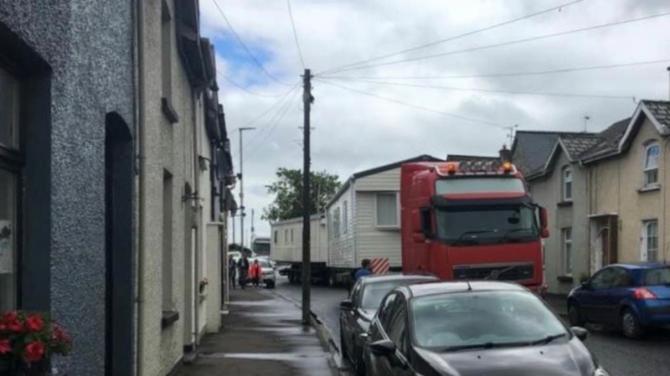 A PROPOSAL to restrict lorries passing through Clady could be introduced this year, according to the Department for Infrastructure (DfI).

A fresh consultation on the proposal to introduce a weight restriction would prohibit vehicles exceeding 7.5 tonnes from travelling through the border village unless for access will begin today (Wednesday).

A similar process in 2019 attracted a number of objections from local businesses who said they would be adversely affected by the weight restriction.

The department says the exemption contained within the new legislation is intended to reduce this impact.

Announcing the consultation on Monday, Infrastructure Minister Nichola Mallon said: "The issue of HGVs travelling through the narrow main street of Clady village as a short cut between the A5 south of Strabane to the N15 in Donegal has been a matter of concern to residents for some years.

"This proposal would result in a reduction in the number of large goods vehicles travelling through Clady, resulting in less congestion and improved health and safety for all road users, business owners and residents."

Under the current proposal there will be exceptions for vehicles from the weight restriction operating from within in the immediate rural catchment and for vehicles delivering or collecting from properties.

The scheme could be introduced later this year, depending on the outcome of the consultation.

It's been a long-running campaign for the people of Clady with the proposal brought before a Stormont committee as far back as 2014.

An increasing number of lorry drivers using Clady as a shortcut from the A5 to Donegal and vice-versa, are posing dangers to villagers and homes, say local people who have been frustrated at the delay in implementing the restrictions.

Damage has been caused to property in the past and some residents have had their cars damaged while the village's main thoroughfare has become blocked on occasions.

He has raised the matter with party colleague Minister Mallon and has encouraged local people to respond to the proposal.

"Large HGVs have been using Clady as a rat run between the A5 and the N15 for far too long," he commented.

"This is a small village with a narrow main street that was never designed for traffic like this and it is absolutely blighting the lives of local residents.

"I am delighted that my colleague Minister Nichola Mallon is holding a public consultation on a proposal to introduce a weight limit which would close the route to heavy vehicles with exceptions for those delivering to the village."

He continued: "I have raised the issue with the Minister and it's great to see action as a result.

"I would encourage people in the area to respond to the consultation and help make this a safer area for everyone."

However, West Tyrone Sinn Féin MLA., Maolíosa McHugh, said it’s time that there was a solution for the people of the village..

"After years of campaigning from the local community, political lobbying/meetings and a comprehensive consultation, it is disappointing that we are now having another consultation into this proposal for a 7.5 HGV weight restriction for vehicles going through the village," he said.

"However, we are where we are and to ensure that there can be no remaining excuse to try and kick the can down the road any further, I would strongly encourage all residents and particularly the people of Clady to respond to the consultation.

"The time for this proposal to be implemented is long passed."

The department says that to ensure that the amended legislation is progressed in an open, transparent and robust manner and that everyone is afforded the opportunity to comment, the short fresh consultation is being undertaken.