Protest planned in support of Palestinians 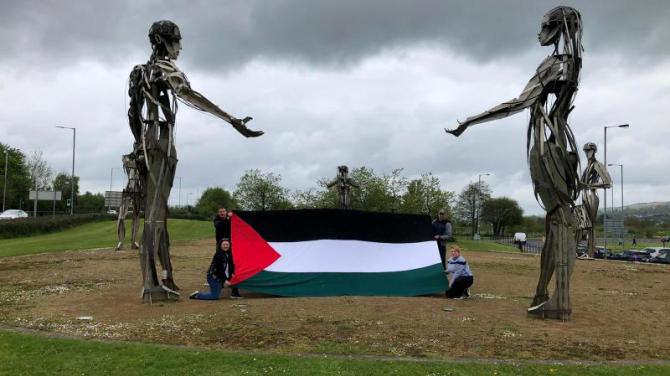 A SHORT socially-distanced protest is planned in the town this weekend in response to the ongoing violence in Gaza and Israel.

The Stand with Palestine event is taking place this Saturday at 'The Tinnies' site at 2pm.

A number of speakers will be in attendance and organisers have asked participants to adhere to public health guidance, to wear a mask and remain socially distanced.

Strabane independent councillor Raymond Barr has encouraged people to come out in support of the protest.

"I attended a protest in Derry where the citizens turned out in force to show solidarity with Palestine," he said.

"I would appeal to the people of Strabane to spare half an hour of your time on Saturday and assemble at The Tinnies at 2pm for a socially-distanced protest to show solidarity with Palestine.

"This barbarity must be stopped."

Sinn Féin MP Órfhlaith Begley said the international community must step in to end the violence.

The West Tyrone MP said: "The scenes witnessed in Palestine over recent days are horrific and a deeply concerning escalation of Israeli aggression against the Palestinian people.

“We have already seen dozens of Palestinians killed by Israeli occupation forces, including many children. This onslaught needs to end.

“This is a result of growing tensions over attempts by the Israeli military to evict Palestinian families out of their homes in Sheikh Jarrah in what the UN said could amount to ‘war crimes’.

“The international community and the Irish government have a duty to step in to help end this crisis and defend the rights of the Palestinian people.”

Meanwhile, Ms Begley's party has also formally requested that the Mayor of Derry City and Strabane District Council, Brian Tierney, open a book of condolence for victims of the ongoing violence.

Strabane Sinn Féin councillor Michaela Boyle said: "There is widespread anger at the ongoing onslaught against the people of Gaza and attempts to evict Palestinians from their homes in East Jerusalem.

“The community of Derry and Strabane has long shown empathy with the plight of the Palestinian people.

"With the tragic events of recent days there has been once again a strong outpouring of local solidarity manifest through many different events.

"People are eager to show their solidarity so as another means of facilitating this, so we requested that the Mayor opens an online book of condolences to give people in the city and district an opportunity to pay their respects.

“We call on the international community to make a stand against the Israeli onslaught on the people of Gaza and defend their human rights.

"Israel must be held accountable.”