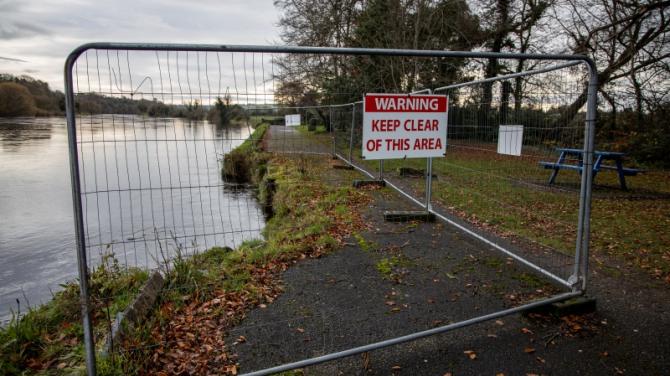 WORK to repair a section of the river walkway at Sion Mills which collapsed over three years ago will begin this month, council has confirmed.

A section of the walk along the River Mourne first subsided in late June 2017 during a time of high water.

The hole in the walkway is currently surrounded by a metal fence which has been erected by council.

The recreational area is popular with walkers and young families and frustration has repeatedly been expressed over the delay in carrying out remedial work.

Concern has also been aired over potential risk to the public should there be any further subsidence.

Work had originally been programmed for October last year but faced delays.

The matter was raised at a meeting of council's Environment and Regeneration (E&R) committee last week by Derg SDLP councillor, Steven Edwards.

Frank Morrison, head of Capital Development and Building Control on council, confirmed that work is due to begin before the end of this month.

"Because the contractor wasn't able to get the works within the river carried out by the end of October last year, there then came into force an exclusion period from the Loughs Agency and Rivers Agency until April before they were able to get in.

"So, the contractor now has started to set up his compound on site and is expected to make a start on this before the end of this month," he explained.

Welcoming the beginning of work, councillor Edwards said it is "long overdue" and needs to be used as a stepping stone for much needed investment on the site.

“While I fully welcome the fact that work will start this month to repair the walkway in Sion Mills, it has been long overdue," he said.

“This walkway was damaged back in 2017 and has lay in a dilapidated state since then which is completely unacceptable.

“Since coming into council, I have lobbied hard and pushed for these vital repairs to be undertaken and delighted to learn that the contractor appointed will move on site this week.

“The pandemic has highlighted the importance of outdoor green space in terms of walking and recreation. However, there is a massive gap locally in terms of provision.

"These repairs should therefore act as a stepping stone for greater investment in the Mourneside Walk.

“I have urged council to explore the feasibility of extending the walkway the whole way to Victoria Bridge along the old railway line and also to Strabane.

"This connectivity would be a massive boost for the local community."

Sinn Féin's Ruairí McHugh has also been pressing for action on the walkway and said the remedial work has "been a long time coming".

“I was delighted to hear confirmation at this week’s Environment and Regeneration Committee that work is finally to begin at the river walkway in Sion Mills," he said.

“This is an area which has so much potential for redevelopment and will be a fantastic location for local families and walking groups to utilise.

“After many hurdles over responsibility, legalities and the timing of works due to impact on spawning salmon and several years of lobbying by Sinn Féin representatives and others, it's great to finally hear progress has been made and work can begin.”