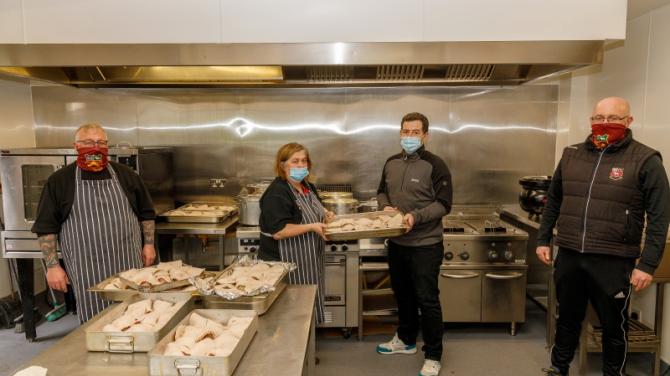 A YEAR after what was to be a one-off service began, the team at Bready Cricket Club have hung up their aprons having delivered over 4,000 meals during the pandemic.

For several months during the first lockdown, volunteers at the club came together to provide a meals on wheels service to those most in need in the local surroundings, particularly the elderly and those in isolation or shielding.

The venture was only supposed to be a one-off goodwill gesture but due to its resounding success and thanks to the generosity of funders, businesses and local people, the service ran from March through to July last year, ending when restrictions eased.

With new restrictions subsequently announced in November and then January, the team quickly dusted off their pinnies and reassembled to ensure that once again, the vulnerable would be looked after during the ongoing pandemic.

Every Sunday, around 130 piping hot meals and tasty desserts were delivered to the doors of residents in Bready, Magheramason, Cullion and surrounding areas.

The meals typically consisted of meat, vegetables, creamed potatoes and a dessert provided by members of the community, to polish things off.

As restrictions now ease once more, the volunteers - who became known as the 'Cricketing Cooks' - have now wound down the service and it has been revealed that in the last 12 months, a total of 4,500 meals have been provided.

A club spokesperson said: "So, exactly one year after what was to be a one week meal service began, our COVID-19 'Cricketing Cooks' community meals support programme has came to an end.

"The club would like to thank the following whom without this programme would not have been possible.

"The numerous families who provided the delicious desserts week in week out throughout the year.

"The numerous families and individuals for the ‘thank you’ cards gifts and donations to support the programme."

With each meal gratefully received, the collective efforts of the Magheramason-based club were duly recognised recently when they were named the winners of the ‘Spirit of Cricket’ category at the Cricket Ireland awards.

"Without your commitment and dedication none of this would’ve been possible.

"Fingers crossed the COVID-19 figures continue to improve and restrictions be lifted so we can support the community in a different way, by providing programmes for everyone in the community in partnership with many groups throughout the local and wider community."

But, for now, the kitchen has the 'temporarily closed' sign up as all hopes turn to the eventual return of normality and some sporting action on the pitch!

"Going forward please be rest assured the club and it’s team of volunteers will be ready to help out in any way we can when needed," the spokesperson added.