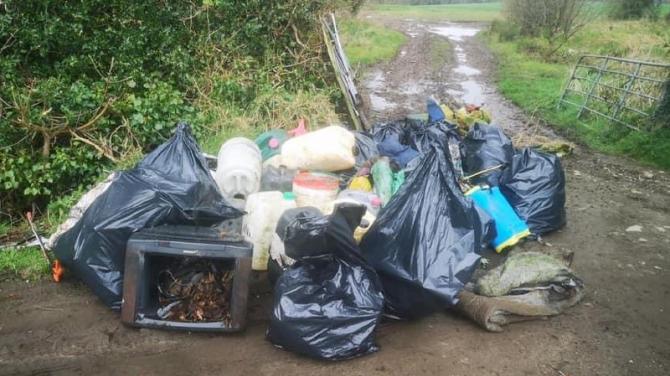 A REVIEW of van access to the recycling centre at Strahans Road in the town could see a new online booking system introduced.

Due to the coronavirus pandemic, large vans with trailers can only access the centre between 10am and 11am Monday to Saturday.

Council says the arrangements are in place to assist with traffic management arrangements and in the interests of the health and safety of staff and site users.

At the monthly meeting of Derry City and Strabane District Council on Thursday, councillors were told that council is now trialling a new online booking system to extend the access for large vans.

The development was disclosed during a discussion on the issue of the escalating problem of fly-tipping across the district.

Sinn Féin councillor Ruairi McHugh said that the restricted access to centres had exacerbated the problem.

"Since lockdown, we have seen an increase of illegal dumping throughout the entire city and district. Most recently, a local beauty spot outside Clady - known as Urney Fort - has seen a large amount of illegal dumping," he said.

He said the land is privately owned but close to a public road, with members of the local Community Development Association lifting the rubbish which was collected by council.

"The pertinent matter is that there is a general feeling throughout the area that the one hour window at the local recycling centres, particularly Strahans Road, is not sufficient enough for the large vans that are coming with rubbish.

"They are queuing out the gate and the thinking is that this is leading to the increase in illegal dumping.

"I would like a report to be brought before the Environment and Regeneration (E&R) committee which would explore possibly extending that one hour window or increasing the amount of opportunities for large vans to access, particularly Strahans Road."

Karen Phillips, director of (E&R), said the issue of van access is "being looked at" with a system to allow vans to book in online across all centres.

"We are actually now at a position where that particular software etc has all been designed and we are looking to trial that.

"We will update members in terms of that and certainly we can bring a further report to E&R in April and hopefully that will actually help with that particular issue because we understand the frustration.

"However, obviously with the COVID guidelines we have to follow them. Therefore, we have come up with this solution which will hopefully work."

Sinn Féin's Michaela Boyle hit out at those responsible for the increase in fly-tipping.

"Fly-tipping has become a major, major source of destruction across our communities and particularly in the rural areas," she commented.

"Whilst I do know there is a lot of talk about vans, there's cars as well - people with household, domestic rubbish - driving along rural roads and dumping rubbish wherever they feel fit

"It is a scourge on society and something does need to be done.

"Dumping and fly-tipping is a source of destruction across the rural areas and indeed people are starting now just along the road.

"You see it as you drive along the road, the bag of rubbish, the stuff out of the chip shops etc and the coffee cups. It's a scourge on society."

Ulster Unionist councillor, Derek Hussey, who earlier in the meeting proposed the extension of temporary waste disposal facilities in Spamount, Castlederg, concurred with the remarks saying the dumping of rubbish is a 'blot on our landscape'.

"Part of the issue is when you get these areas where there is fly-tipping, it creates a mentality for that other person with their chip bag and whatever it is, to just fire it out of the window," Alderman Hussey said.

"It's very welcome that council is considering an extension or alternative means of ensuring access to Strahans Road in particular but I would be hopeful that it can be in some way accommodate the extension of the facilities to a six day facility at Spamount."

The DUP's Alderman Keith Kerrigan said: "The rural roads are in a very poor state with the amount of rubbish that is just dumped randomly.

"People are getting as bold as brass with it.

"Someone just dumped a cooker going down the Orchard Road - the back road to Strabane. It wasn't a local spot for dumping but someone just decided to chuck it off there."

SDLP councillor Steven Edwards, who assisted with the clean-up of the Clady area at the weekend, said action must be taken against offenders.

"I've been out myself in Clady and see the rubbish there every day. We clean it up at the weekend and by the next weekend, it's back again," he said.

"I would like council officers to add in (to the report) what action council are doing in terms of fining and taking action against people littering especially in rural areas and what sort of hours they have and how they are working in rural areas."