Concern over escalating drugs use among teens following latest discoveries 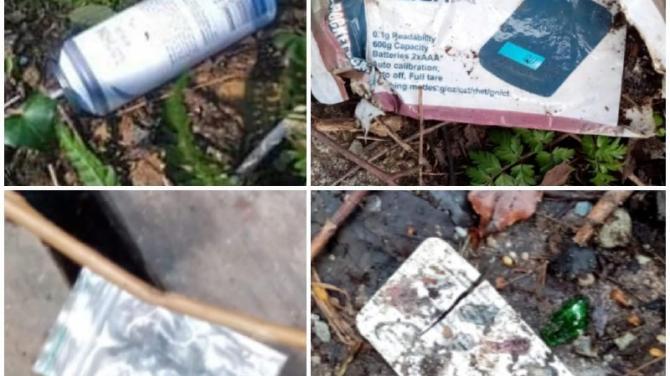 THE discovery of a new drugs den in Strabane has lead to concerns that children as young as 15 are consuming illicit substances.

The site was discovered by parents situated on the grounds of the site of the former Convent Grammar School on the Curlyhill Road.

The area was found to have included evidence of drugs paraphernalia including drugs bags and weighing scales, chairs and empty alcohol packaging.

Strabane independent councillor, Paul Gallagher, visited the scene after being contacted by a parent who had discovered the den.

He subsequently raised the issue at a meeting of council, where he said the young people involved believe that society is failing them.

"I visited a derelict site which is covered in debris of alcohol and drug abuse. This is being attended by 15-year-olds," he said.

"Fifteen-year-olds that believe that this society has failed them. Government can talk about having a lovely, nice, clean facility to educate children.

Councillor Gallagher says there is a need for dedicated and targeted action for those young people who are falling through the gaps.

Sinn Féin councillor, Michaela Boyle, who was also alerted to the den described the find as "absolutely horrendous".

She has urged anyone who sees young people entering the site to report it to the authorities.

"A concerned parent contacted me, along with various locals who saw individuals entering the old Convent site," she explained.

"What we discovered was absolutely horrendous and included many empty drugs and tablet packages, weighing scales, aerosol cans and various other drug paraphernalia.

"To think that people are abusing their bodies with these substances and also sitting in this unhygienic environment is very disturbing."

Councillor Boyle said similar reports have been received about the old 'Gentleman's Residence' nearby.

"I've been in contact with the owners of the site who had contractors on site getting it secured.

"I have also spoken to the PSNI on both issues. If anyone see anyone entering the site please report it in," she added.

Strabane independent councillor, Raymond Barr, has also shared his concerns about the increased use of availability of drugs locally.

He was speaking after the discovery of suspected drugs by a member of the public.

"A vigilant member of the public came across this bag of drugs in a heavily populated area," he said.

"Thankfully it was discovered by a member of the public who brought it to my attention and not a child which could have resulted in tragic consequences."

Councillor Barr added: "This find does not come as a surprise unfortunately as residents locally are dealing with increasing levels of anti-social behaviour.

"The scourge of drugs and drug dealers in Strabane will only continue to have a negative impact on families and the community unless as a community we address the issues these toxic drug dealers are bringing to our town."