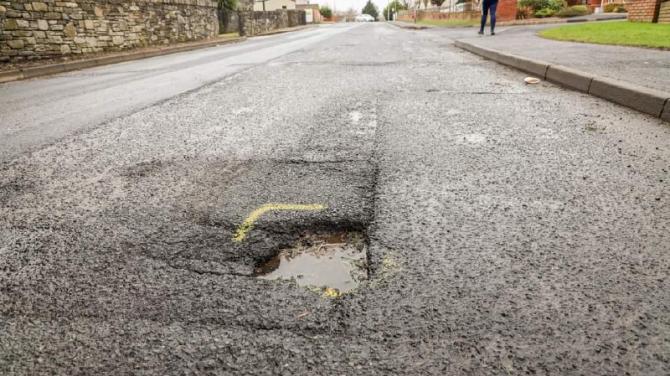 COUNCILLORS on Derry City and Strabane District Council are seeking a meeting with Department for Infrastructure (DfI) officials to raise the issue of potholes on local roads.

The matter was raised by Ulster Unionist Alderman, Derek Hussey, at the monthly meeting of the local authority.

"It's an issue that is hitting probably every councillor in the chamber," Alderman Hussey said. "Is there a possibility that officers could arrange a meeting with Roads Service on the issue of potholes.

"It's not to raise individual potholes...it's to notify DfI Roads Service of the issue.

"There could be operational issues, funding issues, manpower issues, cross-departmental issues and indeed, one that has cropped up lately in the Derg area - utility company issues etc."

The Castlederg-based councillor continued: "It's reported that £104,000 compensation has been paid out to motorists because of potholes in Fermanagh and Omagh. I wonder what the figure is for Derry and Strabane?.

"The issue is not alone the damage that it causes but the danger that it poses to motorists and road users in general.

“I’m proposing an officer would set up a meeting that councillors could attend and we get this information from Roads Service, find out what the issues are.

"If there are funding issues let’s highlight the issues with the relevant departments and ensure this issue can be dealt with.

"At the beginning of the re-established Assembly, I remember that the DfI Minister got additional funding to deal with the backlog that existed in street lighting. Something similar perhaps needs to be brought to the table with regard to this particular issue."

The proposal was seconded by Sinn Féin's Kieran McGuire.

The SDLP's Derg representative, councillor Steven Edwards, spoke in support of the proposal.

"I know the Minister has brought £800,000 forward for our rural roads and that scheme will be coming forward soon.

"It would be good to use that meeting to get an update on what is happening in the council area," he said.

The DUP's Maurice Devenney asked that the issue of gullet cleaning be included on the agenda as he had received "quite a number of complaints".

Sinn Féin's Christopher Jackson said a meeting with road officials would be "useful and worthwhile".

"It is frustrating that the department, up until now, haven't prioritsed potholes and bringing the roads up to the required standard.... despite having increased budgets the issue of potholes has been simply overlooked," he said.

His comments were countered by SDLP councillor, Martin Reilly, who said: "Minister Mallon did bid for monies to address this issue and didn't get a positive response from the Finance Minister.

"We're happy certainly to attend the meeting and engage with local officials to see what we can do on both gullies and potholes for the council area."

Alderman Hussey's request for a meeting gained the unanimous support of the chamber, with Mayor Brian Tierney saying officials would now be tasked to set-up the meeting.