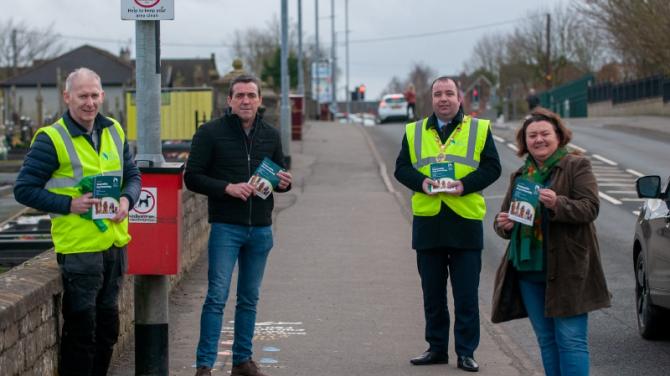 A RAFT of new measures are being implemented by Derry City and Strabane District Council in a bid to battle the persistent dog fouling on local streets, including bringing back 20 staff from furlough to conduct regular patrols throughout the district.

At a meeting of council's Health and Communities committee on Thursday, councillors were appraised of the implementation of actions in order to tackle the escalating issue.

The local authority has embarked on a major new campaign aimed at encuraging responsible dog ownership.

The matter had been raised as a matter of urgency by councillors with the increase in people exercising outdoors during the coronavirus pandemic leading to a surge in the problem locally.

Council has confirmed that additional resources have now been channelled into a dedicated marketing campaign to raise public awareness and more resources on the ground to carry out additional enforcement, with an appeal to owners to take a more responsible role in picking up after their pets.

Council's head of Health and Community Wellbeing, Seamus Donaghy, said the Environment section had reported that over 85 tonnes of dog waste were collected in 2020 which is a significant increase from the 50 tonnes collected in 2019.

He said that while this demonstrates that most dog owners are taking their responsibilities seriously, a small minority are continuing to flout the rules, spoiling walkways for other pedestrians.

In his comprehensive report, Mr Donaghy said there will be widespread public engagement on messaging around dog licensing and Dog Control Orders, while new signage will be installed at council-owned green spaces and designated areas throughout the district.

In addition, each dog owner will receive leaflets in relation to 'Responsible Dog Ownership' and 'Dog Fouling' with the reminder renewal letter for their dog licence.

"The Dog Control Service will increase patrols along with the litter wardens and park rangers to deter dog fouling," he said.

"Staff within leisure services who are currently on furlough will provide support through patrols.

"Cleansing will continue to clean problem areas and liaise closely with all enforcement officers so that patrols can be targeted more effectively.

Patrols will be carried out right across the council area during early mornings, late evenings and weekends targeting more popular walkways and parks.

Mr Donaghy added: "Anyone observed by dog wardens or litter wardens failing to clean up after their dog will be issued with an £80 fixed penalty notice.

"Failure to pay the fixed penalty notice will result in court proceedings, where the maximum fine is £1,000.

"Where appropriate CCTV signage and cameras are installed in areas experiencing problems with dog fouling for a temporary period of time in order to deter and obtain evidence of environmental crime."

You can report an issue with dog fouling by contacting council's Dog Control team on 028 71253253 or email: dogcontrol@derrystrabane.com​