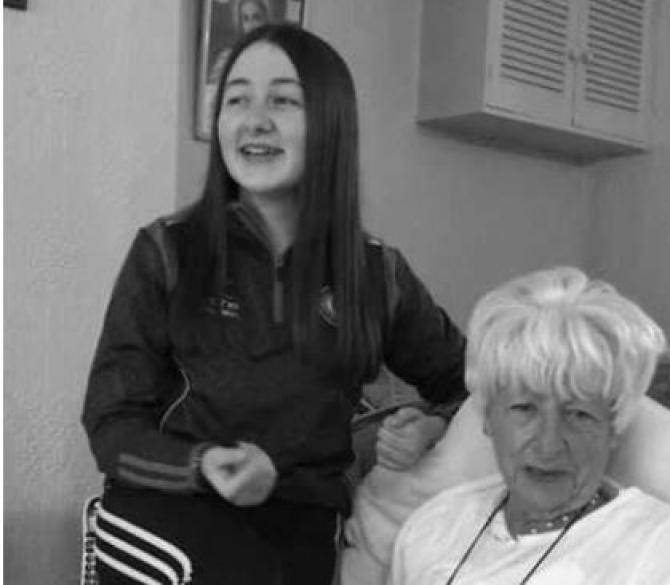 A LOCAL teenager has gained the backing of Derry City and Strabane District Council to have its buildings and the landmark Tinnies site illuminated for World Encephalitis Day.

Seventeen-year-old Naomi Hargan, from Douglas Bridge, with the support of her family has embarked on an awareness campaign following her beloved grandmother's diagnosis of the condition almost two years ago, aged just 74.

Bridie Hargan was diagnosed with Encephalitis back in March 2019, and for her family who knew little about the illness, the Encephalitis Society have been instrumental in giving them the support and information they needed.

Speaking to the Strabane Weekly News, Naomi and her mother Jane, Bridie's daughter-in-law, said they wanted to share their experience to help others and create awareness about a condition that few know about.

"Until March 2019, we knew very little ourselves about Encephalitis until granny was diagnosed with it.

"We had to do all the research to find out about it so I just thought that I would help raise awareness so that other families would know about it too," Naomi, a pupil of Sacred Heart College in Omagh, explained.

"The Encephalitis Society is not a charity that's commonly known but they have really helped us."

It often causes only mild flu-like signs and symptoms - such as a fever or headache - or no symptoms at all.

In Bridie's case, her Encephalitis started with the Herpes Simplex Virus which causes cold sores.

The 76-year-old now has a brain injury as a result of her diagnosis and suffers from seizures.

"At times that (Herpes Simplex Virus) lingers too long in your body, it can go to the brain and cause what they would call a coldsore in the brain - which is inflammation of the brain," Naomi explained.

"Granny Bridie has a brain injury now and suffers from seizures. Symptom wise, she sat for a few days before she went into hospital thinking she was taking a head cold.

"She had been in bed all day but we realised she was very confused and not making sense and she was eventually referred to hospital by her GP and that's where we first heard of Encephalitis.

"There were no major warning signs at all and the coldsore itself that she had, it was a month beforehand when she had it.
"Basically, it's the immune system attacking itself and it causes damage to the brain.

"The condition is very common. There are thousands and thousands of people diagnosed every year, but no-one is ever aware of it until it comes to your own door.

"We had never heard of it until Granny's diagnosis."

Bridie has been in hospital on a number of occasions and was most recently admitted in July last year, and has remained in hospital since then.

"She faces a lot of daily struggles. Her every day life has been completely changed, " Jane explained.

"She has been in and out of hospital for weeks and months at a time since the diagnosis. When she was home she needed a lot of care.

"We live right next door so the children would have visited their granny every day.

"She's the funniest person in the world - the centre of our family. Her grandchildren just love her and she loves them to bits.
"For someone who was so independent, full of fun and full of life, to now be sitting with full-time care and not just having the same life she had, it's devastating."

Due to the current COVID restrictions, the family who are extremely close to Bridie, have been unable to visit and this has been understandably difficult.

Instead they are having to rely on video calls to keep in touch.

"It's heartbreaking," said Naomi. "She needs care 24/7 because she could take seizures at anytime.

"She loved being out and about in the garden but she'll never be able to be in her own wee home again on her own and it's just very hard to know that none of all that she enjoyed is possible anymore.

"Everything has changed for all of us. We are very grateful to still have granny Bridie and we make the most of what we have but things will never be the same again ever."

For Bridie's four children, 13 grandchildren and entire family circle, it has been heartbreaking but they are keen to use their own experience to help others.

"This time two years ago we didn't know anything about Encephalitis. My auntie contacted the charity who were so good to us and sent us out free booklets and information," Naomi continued.

"Through them we were also hearing other peoples stories and how they dealt with things.

"We got an awful lot of information from the charity and they have been really, really supportive. It's been a real help."

To raise awareness of the charity and the condition, the Hargan family have now embarked on a campaign which will see buildings across the city and district go red for World Encephalitis Day.

When Naomi posted about her plans on Facebook, she was contacted by a local family who have just been facing this in the last month and they too had never known of the condition or the Society.

Naomi continued: "It's such a common condition but so little is known about it or the Encephalitis Society.

"It's nice to be able to help someone else and we are hoping by raising more awareness, other families out there can get the help and support too.

Jane added: "The entire family are incredibly proud of Naomi and the awareness she has already raised.

"We know her granny Bridie would be so proud of her for what she is doing. They were like two peas in a pod and she'd be smiling about it."

Following a post by the Encephalitis Society on social media, Naomi decided to lead the charge to support the work of the charity and to pay tribute to her granny.

She contacted the Mayor Brian Tierney requesting that council buildings be lit in the red colour of the Society on World Encephalitis Day on February 22.

"I follow the Encephalitis Society on Instagram," Naomi explained. "I saw that for World Encephalitis Day they are trying to get landmarks lit up red.

"I thought I'd try something similar here and the next thing I knew, the Mayor had replied agreeing that he would cover the costs and have the council buildings lit up red, including the Guidlhall and Tinnies.

"We're overwhelmed by the support and we are very grateful."

Naomi's cousin Jamesy O'Kane will also perform a show on his Facebook page - Jamesy O'Kane Music - on February 20 at 9pm with all donations going towards the Encephalitis Society.

The family view all this as a stepping stone in their push to create more awareness and when COVID restrictions lift, their campaign will continue.

For more information on the condition, visit www.encephalitis.info/