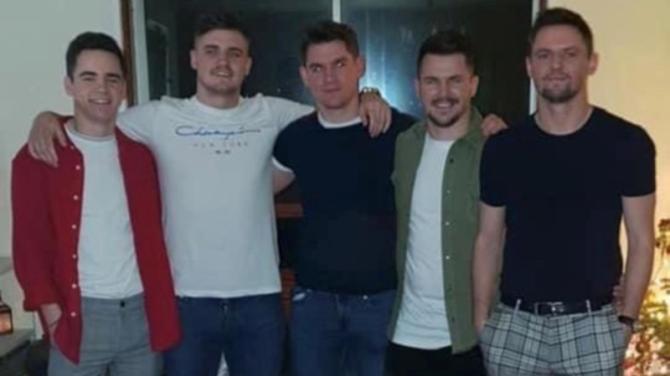 A STRABANE councillor is lacing up his running shoes later this month as part of a major fundraising drive for a young local man who is battling cancer for a third time.

Paul Carlin is currently receiving treatment for Non-Hodgkins Lymphoma, an illness that he has faced down twice before.

The 34-year-old had been clear of the disease for 13 years but it returned in October.

The popular Strabane man, who had settled and made a life for himself in Manchester, has returned home to the town following his diagnosis.

Determined to help, his younger brother Conor, supported by friends at Strabane Athletic Football Club, have launched a major fundraising campaign to assist the family with the expenses they face as Paul undergoes intensive treatment.

A GoFundMe page has been set-up and donations have been pouring in with thousands raised within the first week of being launched, while a 5k walk/run is planned for later this month.

"After being diagnosed in October for Non-Hodgkins Lymphoma whilst living in Manchester, Paul has moved home to receive treatment and needs help with raising funds to help pay for travel, medicines and other expenses," Conor explained.

"With help from Strabane Athletic Football Club, family and friends, we have organised a 5k walk/run to help raise funds to help with treatment, travel, medicines and accommodation - amongst other things.

"Every little helps in this cause to help Paul fight another battle and we know when this town and further afield come together we come together strong.

"So, please every little helps. With every donation, there will be an entry into a prize draw with wonderful gifts donated by local businesses."

Some of the prizes up for grabs are listed on the event Facebook page.

A number of other fundraisers under the appeal have also been organised, including several raffles.

At the time of going to press yesterday (Tuesday), the GoFundMe page had a total of £12,560 raised - and counting.

Conor says the family are overwhelmed by the support of the local community.

He expressed his gratitude to everyone who has donated so far, and to the many businesses who have come forward to offer up prizes for the raffle.

"I can't thank you enough for your amazing support," he said.

"The town has really come out and supported us this and we are humbled."

The 5k walk and run is taking place on Saturday, February 27 and will be socially distanced to allow families to stay in their bubbles.

To donate to the fundraiser, go to https://uk.gofundme.com/f/

Another person also hoping to do his bit for the local lad is independent councillor, Paul Gallagher.

The 'Council to Council' run is taking place on February 14.

"At just 34 years of age, Paul has recently been diagnosed for the third time with Non-Hodgkins Lymphoma so all proceeds will help him in his fight against it," he said.

"The run will take place on Sunday, February 14 (Valentine’s Day). All donations will be greatly appreciated."

To donate to councillor Gallagher's appeal, log on to: uk.gofundme.com/f/council-2-council-

At the time of going to press, £420 had been raised by the Derry City and Strabane District Council member.