Council to seek help of Cuban government in dealing with pandemic 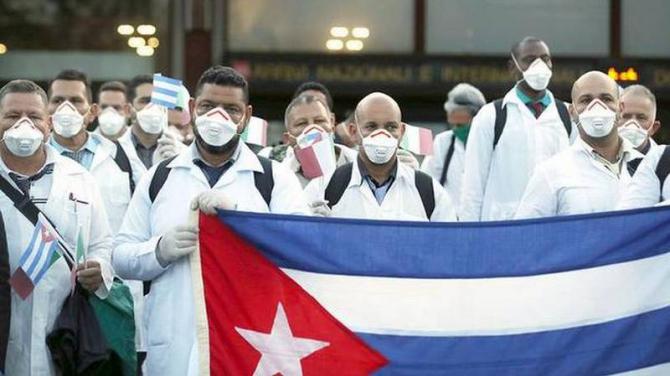 DERRY City and Strabane District Council is to formally seek assistance from the Cuban government in dealing with the COVID-19 pandemic.

The council has unanimously agreed to seek help from the Henry Reeve International Medical Brigade, a group of medical professionals established in 2005 with the mission of international medical solidarity, deployed worldwide in major health crises.

Teams of medics from the organisation have travelled to different parts of the world in a bid to help in the fight against COVID.

The proposal was made at the monthly meeting of the local authority on Thursday by independent councillor, Gary Donnelly and seconded by Strabane independent, Paul Gallagher.

The proposal, which passed, read: "That this council immediately contact the Cuban government and seek assistance from the Henry Reeve International Medical Brigade in efforts to combat the crisis caused by COVID-19 in the Derry City and Strabane District Council area.

"That this council also writes to Altnagelvin Hospital, Dr Tom Black of the GP Federation and the Western Trust, to inform them of their plans.”

Speaking to his proposal, councillor Donnelly said: "Cuba has an excellent record of medical internationalism which has seen dozens of medical missions dispatched overseas to support humanitrian efforts in the wake of all forms of natural and manmade disasters since the formation of the Henry Reeve Brigade.

"These doctors specialise in disasters and serious epidemics."

He continued: "Over the past 15 years Cuban doctors have treated an estimated 3.5 million patients abroad while offering free medical training to overseas students in Cuba.

“In recent times the Brigade has travelled to Italy and Portugal to fight the COVID outbreak.

"The group has also been nominated for the Nobel Peace Prize...Should this new proposal carry, the district should avail of the support of Cuban doctors, nurses and medical staff to help the ongoing efforts to battle the current pandemic in this council area.”

"If we could get them to come over to our council area - fantastic job," she added.

Ulster Unionist Alderman Darren Guy said he had "no bother" in "supporting the call for help".

“We'll take help from wherever it comes whether it be the British Army, the Irish Army, - Robin (Swann, Health Minister) has stated that in the past - and if it comes from the Henry Reeve Medical team then so be it as well.

"We're not in a position to turn anyone down.”

The SDLP's Martin Reilly said any assistance for frontline health workers who are under "severe pressure" would be welcome.

Alderman Derek Hussey (UUP) also spoke in support of the motion and reiterated the comments of party colleague, Alderman Guy.

"What does disappoint me about the motion though is the insular nature of the motion in that it only refers to Derry City and Strabane District Council area," he said.

"This pandemic is being tackled by our health service on a Northern Ireland-wide basis and we are aware that hospitals are sharing resources and transferring patients whenever necessary.

"We've also got to be mindful that our area is serviced not only alone by Altnagelvin but also the South West Hospital at Enniskillen. The southern part (of the council) is serviced by that hospital."

He added: "It's an integrated system and that is not acknowledged within the proposal. If councillor Donnelly wanted to expand on that I would certainly be pleased but I'm prepared to accept the proposal as it stands.

"But, mindful that the National Health Service is an integrated, fully Northern Ireland service and we can't just say, right we'll take the help and to hell with the rest of you."

Motion seconder, councillor Paul Gallagher retorted: "I would say; let's get them in. Let's get them into the Western Trust and then the Trust will allocate them where they are most needed and where the services are most required.

"Dr Tom Black has been on record very recently on radio and television saying that Altnagelvin is working beyond its capacity and that's the reason this motion is coming forward and that's why it's talking about Altnagelvin.

"He said that he would welcome international intervention and support from anywhere so he'll most welcome the Henry Reeves because they have a proven track-record working throughout the world."

Councilor Donnelly welcomed the support for his motion.

Referring to Alderman Hussey's comments he said the proposal could be "easily adopted" by his party colleagues sitting on other councils.

The proposal was carried unanimously.

Get 'Fit for Feb' with council's Everybody Active team

Men charged with aggravated burglary to appear in court