Ballymagorry club targeted by vandals to up security 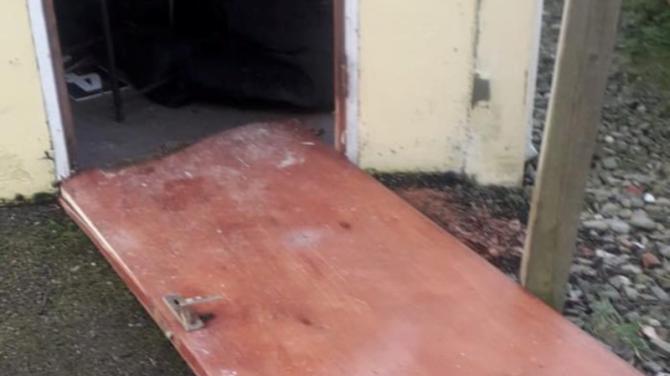 A LOCAL sports club is upgrading its security after a spate of vandalism on the grounds before Christmas.

The damage at Fox Lodge Cricket Club in Ballymagorry was discovered on Christmas Eve but it's not known when exactly it took place.

Considerable damage, estimated to be in the region of £300, was caused.

According to committee member, Adrian Heywood, the vandals ripped a door off its hinges, smashed boards and left litter strewn around.

It's the first time the facility, which also acts as the central hub for village activities, has been targeted.

As well as footing the bill for the repairs, the club is now having to look at measures to deter any further incidents.

Mr Heywood, who discovered the damage, said: "We're not 100 per cent sure of when it actually happened but I would say it was around December 23, even Christmas Eve.

"They pulled the door off the scorehut where the scorers sit to mark the book during the game.

"We have a catching cradle used by players during training, and five or six boards were broken on that.

"There is a bit of an alcove at the front of the two changing rooms and they've obviously been in there eating their takeaway a few times with chippy bags and rubbish laying everywhere.

"Barrels for rubbish were also thrown down into the field along with a ten foot steel bar."

Mr Heywood said the vandalism had caused deep disappointment within the club and community.

"The place has been closed for several months due to COVID," he continued. "The damage wasn't major and it's the first time we have had the likes of this happen.

"It's disappointing more than anything. It's just outright vandalism.

"The damage they did, £200 to £300 will sort it, but again, it's money that shouldn't have to be spent repairing damage caused by young people.

"We'll definitely be looking at upgrading the security and will probably have to install cameras".

In a message to the culprits, Mr Heywood urged: "Leave the place alone. It's the only venue we have in the village for sporting activity and we do a lot for the village and the community.

"We'd appreciate it if whoever is at this, that they would stop it.

"We have seen what has happened up at Sion Mills a few times and we don't want it to escalate to that."

During the pandemic, Fox Lodge clubhouse has been the base for the community outreach and from where a team of volunteers have distributed food parcels and essential items.

Leslie Hetherington, of Brighter Ballymagorry Development Group, said he was saddened to see the vandalism.

"Since the pandemic started in March, Fox Lodge has been the hub for Brighter Ballymagorry Development Group to use.

"Nothing has ever been a bother for the club when it comes to providing use of the building to help the community out in any way that we could.

"It's a shame to see it getting vandalised and I would appeal to the people responsible to have some respect for the area they live in," Mr Hetherington said.