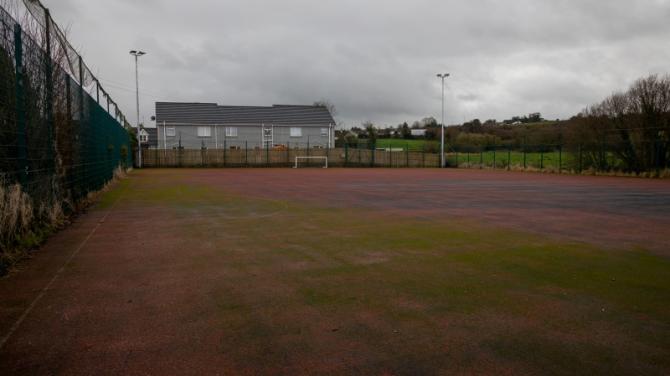 A SION Mills community worker has voiced his frustration that the village, he claims, is "getting the crumbs off the table", when it comes to investment by the local council.

Andy Patton, of Sion Mills Community Forum, was speaking out on the long delay to upgrade a recreational space in the village.

The Bog Park playing surface is in urgent need of repair and needs updated to a 3G/4G pitch MUGA, says Mr Patton.

Despite "many promises", the community activist says there has been no firm indication of when the work will be programmed.

"Work to upgrade the Bog Park in Sion Mills was promised on Strabane District Council. I was assured there was £80,000 put aside to renew the surface of it.

"Then during the first term of Derry City and Strabane District Council, I was told that the price had jumped massively and it still didn't happen during that first five-year term of council.

"Now, we're into our second year of this council term and it's still not done. We still don't know where we stand on it.

"So many promises have been made of funding that was being put aside for it and yet and all, all we see is new parks all around Derry, new community centres and the likes, while Sion Mills is just left in the lurch all the time.

"The rural area is the forgotten part (of the district) and it's not good enough."

Mr Patton said he has brought the issue up regularly at meetings but has yet to receive a timescale for any upgrade work.

"It's a Multi Games Use Area (MUGA), it's a rubberised surface and it's been patched up in the past when there were chunks out of it.

"It's slippy. A person could break a leg on it and there is moss growing through it as well," he warned.

"Yet and all, there are state-of-the-art pitches all around the city.

"I raised this issue during two council Zoom meetings recently, including one on the rights of children.

"The right to play is one of the rights of the child but that right is being denied to the young people of Sion Mills. There doesn't seem to be a right for our youngsters to have a safe kickabout area.

"Every five years is a generation for a young person. From 11 years of age to sixteen is a generation gap so they have all missed out on a playing surface that was supposed to be upgraded.

"We're still sitting in limbo and we're still just getting the crumbs off the table from the Derry Council area because that's just what it is; it just seems to be all for the city.

"I'm not afraid to shout about it. If I had have got into council, it would have been putting it out there."

In response, a spokesperson for council said that plans for the future of the playing area remains under consideration.

"The Bog Park/Ballyfatten pitch in Sion Mills was closed for health and safety reasons given damage to the playing surface and its general condition," he said.

"A number of options with regards to future pitch provision within the Sion Mills area, including Ballyfatten, are currently under consideration.

"Council will bring forward proposals for Ballyfatten as part of this exercise in due course which will then be open for public consultation, review and comment."