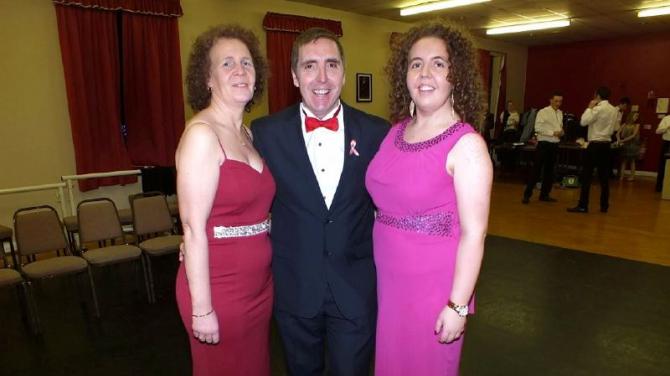 Like so many fundraising events the annual showpiece, which has raised thousands for local charities each year, cannot go ahead in its usual format due to COVID restrictions.

This year would have seen the show celebrate its 13th straight year at St Patrick's Hall.

Determined to keep the Strictly magic alive and to raise some much-needed funds for charities whose income has been curtailed due to the pandemic, the organisers have decided to go virtual.

Fourteen couples are now battling to be crowned 'Strictly 2020 Virtual Champions' via an online public vote.

Videos of the dancing couples from previous years are all available to view on the Strictly by M Dancin' Facebook page and the vote will run until this weekend.

Votes cost £1 with all proceeds going to this year's nominated charities.

Charities benefitting include Women's Aid, Foyle Hospice, Alzheimer's Society, Marie Cure, Care for the Elderly Strabane, the Koram Centre in Strabane and many others.

The brains behind the event are ‘Spirit of NI’ award winners, husband and wife, Paul and Rosemarie Mullen alongside their daughter, Sarah Jane.

Paul said despite the disappointment of not being able to bring the show back in a physical setting, the team were keen to continue supporting charities who have lost income streams due to the pandemic.

"We are going virtual this year," he explained. "With the current COVID situation and the restrictions, we can't go live with our normal show so we selected 14 couples from previous years and have taken their dances and put them together in short videos.

"It's all done keeping within the regulations. The couples are not dancing together now, their dances are from their time on previous shows.

"The videos are now available to view online with the public being encouraged to vote for who they want to see as the 'Strictly 2020 Virtual Champions'."

The videos, with accompanying PayPal links, have been shared on the Strictly by M Dancin' Facebook page, while the participating couples have also been promoting their dancing on their own social media profiles.

"We have edited the videos and sent them to each couple so they can ask for the public to vote for them," Paul continued.

"The couple with the most votes will be this year's winner, with all funds generated going to local charities as always.

"With the current restrictions, all the charities are facing even greater difficulties this year in funding.

"Their needs are increasing but their income is suffering. With fundraising events like ours not happening, it's making it all the more difficult.

"We wanted to keep Strictly going in some format and to still contribute to these very worthy charities by raising as much money as we can in these challenging times."

Voting is open until Saturday, December 5 at 12 noon.

The votes will then be tallied and the winners will be crowned via a live streaming at 8pm on Facebook.

The virtual show is the culmination of months of fundraising by the Strictly team.

Last month, a series of socially distanced sponsored walks from Patrick Street up Knockavoe Mountain took place, while the team have also organised a number of draws.

Paul added: "This is the culmination of all our funding in this very strange year.

"Rather than do nothing we decided to do something.

"At this time of year we would be very busy making preparations for the show but we've just had to adapt to the new way.

"We are asking people to vote now and vote often for their preferred couple.

"It's difficult times for everyone but every little counts and we are indebted to the 14 couples who have agreed to take part.

"This should have been our 13th year of Strictly but hopefully, all being well, we will be back in St Pat's Hall next year.

"As always, thanks to everyone for their continued support.

To view all the dances and to find the links for voting, log on to the Strictly by M Dancin' Facebook page.