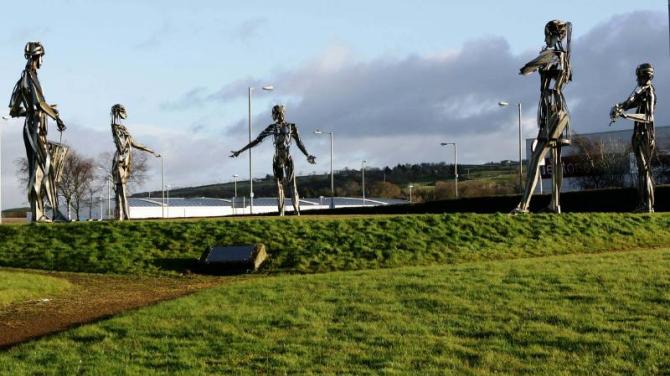 A REPORT on costings to upgrade the lighting system at 'The Tinnies' site in Strabane is to be brought before a future committee meeting of Derry City and Strabane District Council.

In recent years the landmark Strabane site, formally titled 'Let the Dance Begin', has been utilised to show support for a number of causes and campaigns by illuminating the giant metal structures in various colours, however it's understood that more than half of the lights are now not working.

In order to bring the lighting system back up to standard, major investment is required by council, a local councillor has said.

The SDLP's Steven Edwards said the lights that do work are dull meaning it's difficult to notice the different colours.

He raised the issue at Thursday's monthly meeting of council where he said that although council had "done good work" at the site recently with the cutting back of hedges and the installation of picnic benches, "more needs to be done around the lighting".

"The Tinnies is a landmark for Strabane and it has been used to show our support for a number of different campaigns such as Pride and recently Baby Loss Awareness Week but there is a general feeling with the public that the lighting is inadequate to mark our respects and show our support for those campaigns," councillor Edwards said.

He asked that council "act on this" to upgrade the lights and bring them up to standard along with investing in lights at the Alley Theatre in the town.

"I hope that a report can be brought to the relevant committee outlining the actual cost of upgrading the lights.

"There are a few rumours out there that it could be £20,000 to £40,000....I think that information should be brought before the committee and council," he added.

Councillor Edwards also asked for the report to include details of what has been spent to date on lighting up the structures.

The proposal was seconded by party colleague, Jason Barr.

Chief executive John Kelpie said "all of the details" requested is available and will be brought before a meeting of council's Environment and Regeneration (E&R) commitee.

"We have already been looking into this matter and we're happy to bring a report to E&R as soon as possible outling everything that has been asked for," he added.

Speaking after the meeting, councillor Edwards welcomed that committment and said: "It’s an absolute disgrace that The Tinnies haven’t been invested in and that we are unable to mark significant occasions or movements properly in Strabane town.

"In the last few months, I requested council to light up the Tinnies to mark events and celebrate certain occasions.

"But more than half the lights are broken and for those which work, you wouldn’t even notice the different coloured lights.

"This is compounded by the fact that the Alley Theatre isn’t able to be lit up either."

He added: "When you look at Derry, council buildings on the Strand Road, the Guildhall and even the city clock are all lit up and lit up well.

"When it comes to Strabane, we are treated as second class citizens.

“We need to be able to mark occasions and show our support to important campaigns. Campaigns like the Baby Loss Awareness week, Pride and all those involving minority groups and others involving campaigns around mental health, disabilities and others.

“At last Thursday's full council meeting, I raised the issue with the chief executive who agreed to bring an options report back to committee for consideration.”