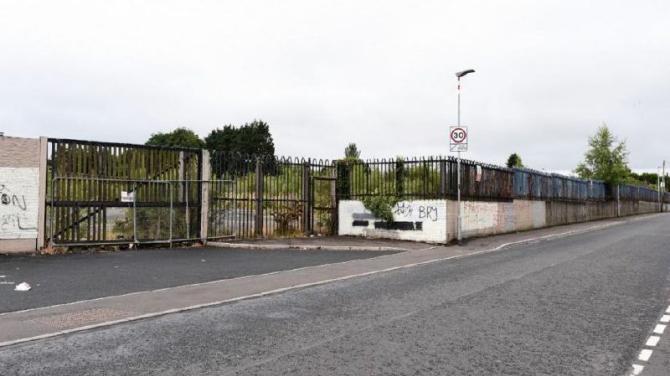 SECURITY guards have begun patrolling the Adria site in Strabane in a bid to quell ongoing anti-social behaviour.

The derelict former factory site, which is soon to be transformed into a major social housing development, has become a magnet for anti-social behaviour since it closed in 2006.

The Beechmount Avenue site is a known hotspot for young people to gather in and has been ravaged with repeated fires with calls to have it properly secured.

In the aftermath of the most recent incident last Wednesday, an emergency virtual meeting was held with councillors and statutory agencies to discuss the ongoing issues, particularly in the lead up to the forthcoming Halloween celebrations.

A representative from Habinteg Housing Association, the company behind the long-awaited redevelopment plans, was also present at the meeting.

An outworking from that meeting has been a commitment from Habinteg to provide a security team to carryout hourly patrols of the site.

It's understood those patrols started at the weekend.

"It was a productive meeting," SDLP councillor Jason Barr said.

"Unfortunately the PSNI were invited but didn’t attend this meeting, which doesn’t give much hope and faith. Failed promises can’t keep happening....actions speak louder than words."

He continued: "Habinteg have now put in place security to patrol the site seven days a week. I have requested that this happens more frequently during the day.

"Other proposals from other elected representatives were the likes of clearing the site to get rid of all the hiding places within which Habinteg will also take forward.

"The main issue here is the safety of our young people and the people directly affected by this type of behaviour."

The meeting, facilitated under the council's Bonfire Working Group, also heard concerns expressed over bonfires in the Springhill Park/Mount Carmel areas on the grounds of former schools.

Sinn Féin's Michaela Boyle, who was also involved in the discussions, said it's important that young people realise the current pandemic means this year's Halloween must be different.

Speaking afterwards, she said: "Reinforcement was made that due to the current pandemic these bonfires should not go ahead.

"I also raised the anti-social element of the gathering of bonfire material and the effects it has on our communities.

"People feeling frightened and concerned for the wellbeing of them and their families. Disappointed the PSNI where not in attendance to hear of the concerns - although invited - as residents in these areas conveyed to me their genuine concerns in regards to the anti-social behaviour happening on a nightly basis."