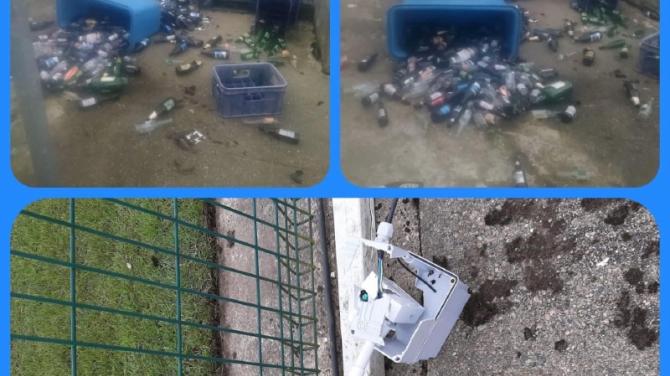 A LOCAL GAA club is appealing for an end to incidents of anti-social behaviour and damage to its facilities.

Páirc Mhic Sioghair, the home of Strabane Sigersons GAA Club, has been targeted by a "small minority" of young people who have caused damage around the clubhouse and smashed glass on the playing surfaces.

In an appeal via social media, the club posted images of the recent destruction and called for an immediate end to the behaviour.

"We provide some of the best facilities in Ulster, maybe even Ireland for Gaelic games for the people of Strabane and surrounding areas.

"To see our facilities treated the way they have been by a very small minority of our young people is extremely disappointing and frustrating.

"We have seen glass bottles smashed on our playing surfaces, damage around the clubhouse and to electricity ports.

"This electricity port can be seen in the pictures was destroyed and now has to be replaced.

"The problem with this type of damage is the risk of serious injury or worse to users of our facilities."

Last year the club installed CCTV which has captured many of the incidents.

"As a club we do not want to take this any further. We love seeing young people making use of our facilities.

"This is what the GAA is all about. We would like to have every child in Strabane at our grounds and taking part in Gaelic games," the committee added.

Throughout the pandemic, the club and its members have been central to the community response to COVID-19 and in May raised thousands of pounds for two local organisations following it's hugely successful 'Sigersons Solo Strabane' challenge.

Unless the behaviour ends, the club says it faces the prospect of having to lock the gates of its Ballycolman grounds - but it is a last option and one it hopes it doesn't want to have to take.

"Please ensure your child knows the severity of these incidents and the danger that tampering with electrical ports could do.

"We don't want to have to close our gates over this vandalism but if it continues we will be left with no option," the statement added.