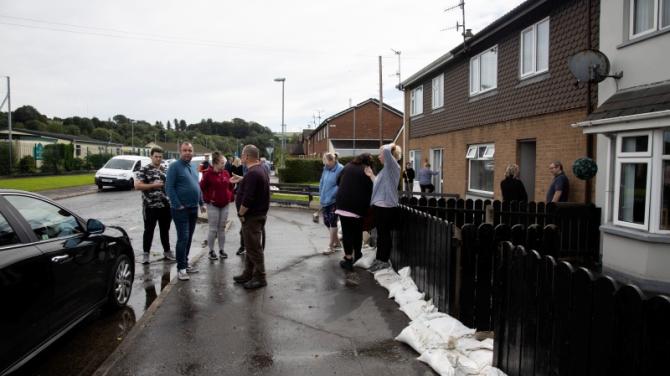 INFRASTRUCTURE Minister Nichola Mallon has assured flood-hit residents of Ballycolman that she is committed to addressing the recurrent flooding problem in the estate.

Angry residents subsequently spoke out expressing their frustration that the statutory agencies have not resolved the problem despite their repeated pleas for action.

A number of businesses in the town centre were also impacted by flooding.

In the intervening period, a number of meetings with agencies have taken place in a bid to solve the issue while Mayor of Derry City and Strabane District Council, Brian Tierney, has also been pushing the case for residents.

Minister Mallon says that work is ongoing between all relevant stakeholders to "provide change in the area".

She was responding to an Assembly question from party colleague and West Tyrone MLA., Daniel McCrossan, on the issue.

He had asked the Minister for an "update on plans to address flooding in Ballycolman, Strabane."

"My department has commenced initial studies to investigate the operation of the storm sewer drainage network at the Ballycolman estate.

"In addition, my officials have placed a sand bag container, stocked with 700 sandbags, in the Lower Ballycolman area close to the affected properties and distributed eight keys for the containers to the local community," Ms Mallon replied.

Continuing, she said other major works are being assessed however these will be subject to the availability of funding if progressed, she added.

"However this will be expensive to carry out and with all major works will be subject to funding.

"I wish to assure residents that my department will continue to engage with all stakeholders and work to provide change in the area," the Minister added.

They each thanked Mayor Tierney for a meeting he had held with residents and agencies on the matter.

They also commended council officials for conducting a review of the financial assistance available to affected residents when it emerged that only five of 18 claimants to a £1,000 grant administered by council had been unsuccessful.

It's understood a number of those initially turned down have now been compensated.

"There's still a smaller number of outstanding issues but hopefully we will be able to work them through," councillor Gallagher added.

"The meeting that you (Mayor) hosted was a very positive meeting in the sense that we seen the Water Board acknowledging some liability and that they have actually been out visiting residents, seeing the damage that was done and doing some evidence gathering."

He said he hoped council could "take it further down the road and get the issues completely resolved".

Mayor Tierney said he he was keen to "try and bring some peace to those residents who have been tortured by flooding issues for a number of years."

"Hopefully we will be able to get things moving forward for them and put an end to that," he added.