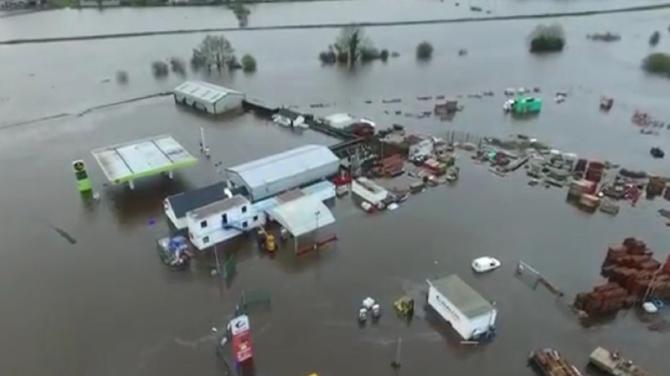 WORK on a £300,000 flood defence scheme for flood-hit Clady is due to begin in the coming weeks, the Infrastructure Minister has confirmed.

The Minister had been responding to an Assembly question from SDLP MLA., Daniel McCrossan, who has asked for an update on plans for flood defences in the village.

It’s now five years on since homes and businesses in the border village were left counting the cost after unprecedented flooding twice inside three weeks caused widespread destruction.

Major damage was caused when the village bore the brunt of ‘Storm Desmond’ in 2015 when the River Finn - which straddles the Co Tyrone village and Finn Valley - burst its banks sending gallons of water pouring into properties in the surrounding vicinity.

Since then there have been further incidents of flooding. Local politicians and community representatives have been pressing for action to protect the village from future flooding.

While confirming the flood mitigation scheme is programmed to begin the Minister has ruled out a separate scheme to protect residents just outside the village, saying it is not economically viable.

In her response, Minister Mallon said: "The flood defences at the River Finn, which are predominantly earthen flood banks, were constructed around 60 years ago and provide some degree of protection to properties in Clady village and the surrounding area.

"My department has carried out a number of flood studies to assess the level of risk to properties in this area to determine if a viable flood alleviation scheme, to enhance the level of flood protection to properties, could be taken forward.

"Unfortunately overarching flood alleviation proposals, to reduce the existing flood risk to properties in Clady Village and outlying areas along the Urney Road from the River Finn, are not economically viable.

"However, my Department plans to carry out a localised flood alleviation scheme on the Donnygowen Burn, where it joins the River Finn.

"This scheme is planned to commence on site in October 2020 with an estimated cost of £300,000. The scheme will involve the construction of floodwalls, widening of an existing road bridge and associated drainage works."

She added: "This scheme will reduce the risk of flooding to properties in the immediate vicinity of Clady Bridge.

"It is anticipated that the works will be substantially complete by March 2021."

News of the imminent work has been welcomed by SDLP councillor on Derry City and Strabane District Council, Steven Edwards.

He said that all options need to be considered for reducing flooding to homes in the village.

"I welcome the fact that work will soon be undertaken to alleviate localised flooding in the Clady area. This £300,000 investment is good for the people of Clady village and I hope it goes some way in alleviating floods in the village in the future," he commented.

“Clady village has witnessed some of the worst flooding in recent years with many homes and businesses substantially damaged.

“There is substantially more work needed however to completely reduce the risk of flooding to homeowners and businesses who’ve been ravaged by floods in recent years. I will continue in raising this with the Minister and other authorities.”