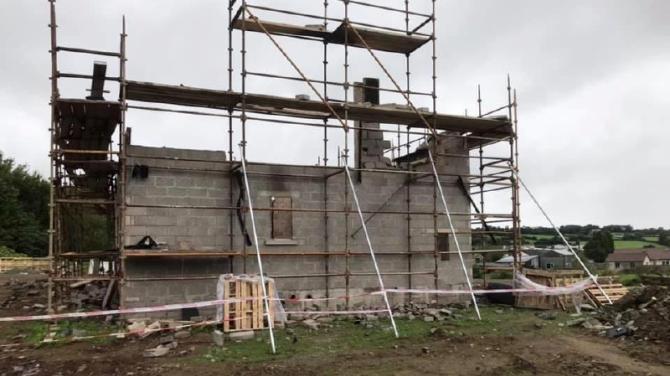 POLICE have renewed their appeal for information on an arson attack which destroyed a local family's new build home just months before they were due to move in.

Paul and Dympna Gallagher began building their dream family home back in May but arsonists struck in the early hours of Saturday, August 15 causing tens of thousands of pounds in damage.

Three Northern Ireland Fire and Rescue (NIFRS) appliances were tasked to the scene to bring the blaze under control and it was later confirmed that the cause of the fire was 'deliberate ignition'.

Police are still hunting for the arsonists who targeted the house which was being built off the Urney Road.

It had been built up to roof level but such was the extent of the damage that it will now have to be completely demolished with the Gallagher's now facing the heartbreaking task of starting all over again.

In a bid to help, a major fundraising appeal on the Justgiving site was initiated.

At the time of going to press yesterday (Tuesday), £2,305 had been raised.

Police say investigations are continuing and have appealed for anyone with information or who may have witnessed any suspicious activity, to come forward.

A PSNI spokesperson said: "Police have renewed an appeal for information regarding an arson attack on the Urney Road area of Clady on Saturday, August 15.

"The incident occurred at around 4am at a home which was under construction causing extensive damage to the property.

"Enquiries are continuing and police are appealing to anyone who witnessed anything suspicious in the area to contact police on 101, quoting reference number 441 of 15/08/20.

"You can also submit a report online using our non-emergency reporting form via www.psni.police.uk/makeareport/

To donate to the appeal, log on to: www.justgiving.com/