Tinnies and other landmark buildings light up blue for Noah 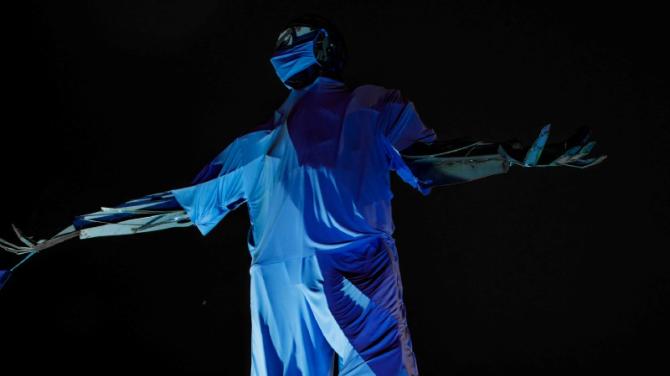 PUBLIC buildings and landmarks across Northern Ireland lit up at the weekend in memory of Noah Donohoe and in support of the campaign by his family as they continue to seek answers surrounding his tragic death.

The Tinnies sculptures in Strabane, the hometown of Noah's mum Fiona, lit up blue on Saturday and Sunday in support of his family's campaign.

The 14-year-old left his home in south Belfast on Sunday, June 21 and was on his way to meet friends to study for a Duke of Edinburgh project.

He was last seen close to the Shore Road area in north Belfast before his body was recovered from a storm drain six days later.

A post-mortem examination concluded he had drowned.

Mayor of Derry City and Strabane District, councillor Brian Tierney, said the lighting up of the structures symbolised the city and district's continued support and solidarity for the Donohoe family.

Mayor Tierney said the gesture would show the Donohoe family that the people of Derry and Strabane are with them as they try to piece together the events following Noah's disappearance.

"This is every parent's worst nightmare and the fact that Noah's family are left with so many unanswered questions just adds to the sadness of this terrible tragedy," he said.

"By lighting the Tinnies up blue for 'Remembering Noah' in his mum Fiona's hometown of Strabane we show the family that we stand firmly with them in their quest for truth and raise awareness of their campaign."

He added: "I would like everyone to think of Fiona and the Donohoe family and I want to personally stress my own support for them as they seek the answers they need to give them some comfort following Noah's tragic death, and to move forwards in the knowledge that everything has been done to find out what happened to him in his final hours."

A series of murals depicting an image of Noah set against the backdrop of a blue heart have been painted on walls in Belfast.

It's understood plans are underway for a similar tribute in Strabane.

The murals and other displays are in support of the campaign by Noah's mother, Fiona Donohoe, to raise awareness of his disappearance and death.

Sunday marked nine weeks since Noah went missing and Fiona has been calling for information surrounding his death.

She has set-up social media accounts in memory of the teenager in a bid to get those answers while an inquest has been opened with a full hearing expected to take place in January.

In an emotional interview posted on the My Noah social media platforms, Fiona said she wanted more people to know about her son.

"My Noah is now everybody's Noah," she said.

"I'll gratefully share everything about my Noah so that people can get to know him because he was such an amazing boy.

"These social media accounts; I don't know much about social media but it's a way for people to learn more about Noah because they've taken him into their hearts.

"He wasn't perfect. He had socks lying on the ground. It could have taken him ten hours to tie his shoelace if I didn't keep prodding him.

"His humour - he's just such a funny boy. It's making him even more real to people because he's so alive in my heart, he's so around me constantly.

"I just need people to see the time invested in searching for him and wanting answers... it's a platform for Noah to sing out - and he couldn't sing.

"He was in the choir. He was such an enthusiastic wee boy.

"He hadn't a note in his head but my God he really gave everything to life and that's why I want people to give as much as they can until we get answers.

"It's all about getting the answers."