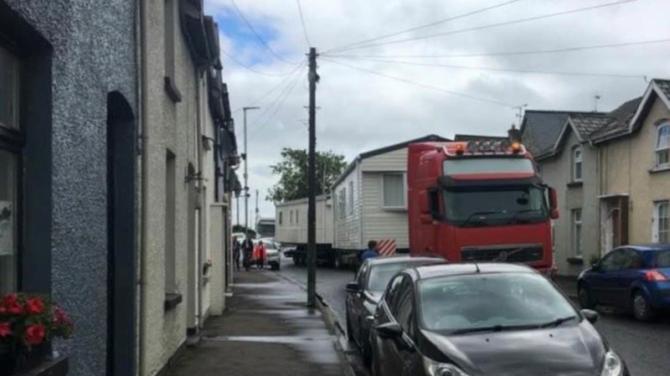 FURTHER consideration on issues raised during the consultation on a plan to restrict lorries passing through Clady is needed before a final decision can be made, a Stormont Minister has said.

The department had said that in certain circumstances there would be exceptions to the weight restriction including those vehicles making deliveries to, or collections from, addresses within the locality.

It marked a major milestone in a long-running campaign by villagers in the North Tyrone village who say an increasing number of lorry drivers are using Clady as a shortcut from the A5 to Donegal and vice-versa.

This, they say, is posing dangers to local people as well as pupils from the nearby St Columba's Primary School, which lorries also bypass.

Now, more than a year on, villagers and politicians are becoming increasingly frustrated at the delay in implementing the restriction.

To this end, Roads Minister Nichola Mallon was pressed on the issue in the Assembly via written questions from Sinn Féin's Maolíosa McHugh and the SDLP's Daniel McCrossan.

They had each asked the Minister for an update on the consultation process and when a decision on the embargo will be made.

In response, Ms Mallon confirmed the public consultation process had attracted feedback from a number of businesses who felt they would be impacted.

"Following the formal consultation on the introduction of a 7.5 tonne weight restriction through Clady village in 2019, a number of responses were received from local businesses owners who expressed concerns as to the potential impact of the proposed restrictions on their operations," she said.

"Further consultation and consideration of the issues is ongoing before a decision is made in relation to this proposal."

The issue was brought into focus last month when a large number of lorries passing through, following a diversion off the A5 due to roadworks, brought the village to a standstill.

Maolíosa McHugh said the incident highlighted the need for the department to implement the restrictions on Bellspark Road immediately.

"Clady can't be used as a bypass. Implementing the recommendations from the consultation is long overdue," he added.

SDLP Derg councillor Steven Edwards who also witnessed the chaos, said he believes a decision will be made soon.

“Since becoming councillor for the area, this is one of the main issues I’ve been contacted about as residents are simply fed up. No one can blame then for that.

“I’ve been in Clady to see firsthand the amount of lorries pass through the village. These roads and the bridge are not designed to take such traffic.

“I am confident a resolution will be made soon. There are some concerns over local businesses who will be impacted by a complete ban and I know officials are currently working with them on the issue," he said.

“I believe the Minister and the department will make a decision soon and hopefully deal with this long term issue."