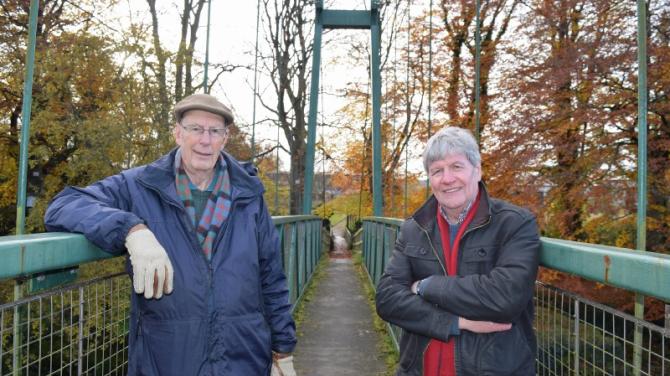 ULSTER Giants, which celebrates Northern Ireland’s rich civil engineering heritage, continues this Monday, with presenter Joe Mahon turning his attention to two iron suspension bridges, both in County Tyrone and both with stories of dedication and determination by talented individuals to ensure their longevity.

In this the third series, presenter Joe Mahon travels across Northern Ireland and with the help of the experts in their fields, he reveals the stories behind some of Northern Ireland’s well-known landmarks and also sheds light on how civil engineering is in operation all around us.

In this episode, Joe Mahon sees and crosses two special bridges that span the centuries - on the River Blackwater at Caledon and on the River Mourne at Sion Mills.

Both bridges are for pedestrian traffic only and were erected originally in the 1800s to accommodate mill workers who had to cross the river in order to get to their place of work.

Joe talks to the two engineers responsible for the re-construction of each bridge and learns a little about the devilish detail involved in creating structures of such grace and beauty.

The “Swinging Bridge” at Sion Mills is the longest suspension bridge in the country.

It was built by the Herdman Brothers to bring workers to and from their flax mill in the town.

Ulster Giants regular Phil Donald tells Joe how it got washed away not once but twice during floods and how he was involved in the third and final rebuild in 1987.

The Dredge Bridge at Caledon is a hybrid that now occupies a unique place in our engineering heritage.

Don McQuillan from the Institute of Structural Engineers talks to Joe about its entrepreneurial designer, with Jack McClure telling its most recent history, and how the bridge was meticulously dismantled, moved and rebuilt.

Ulster Giants is produced by Westway Film Productions for UTV and is sponsored by ‘Mid & East Antrim – A Place Shaped by Sea & Stone.’

You can watch this episode on Monday, July 27A at 8pm on UTV and on catch up on www.itv.com/utvprogrammes