Motion to call for co-ordinated approach to tackle Hogweed problem 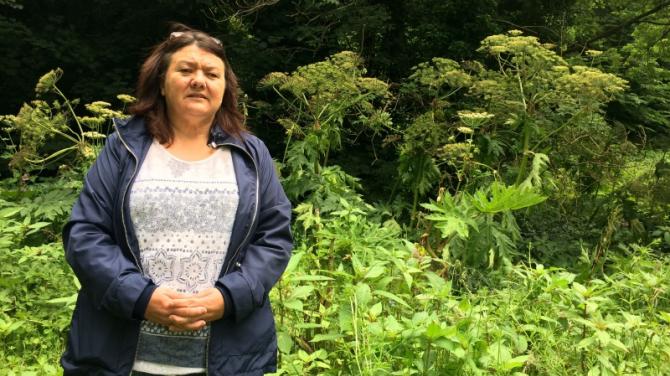 A MOTION is to come before the monthly meeting of Derry City and Strabane District Council calling for a co-ordinated inter-agency approach to tackle the increasing spread of Giant Hogweed across the district.

The proposal by Strabane Sinn Féin councillor Michaela Boyle will be discussed at today's (Thursday) meeting.

Commonly found close to river banks where its seeds are transported by the water, Giant Hogweed has been found growing along areas of the town including the Great Northern Link (bypass), Lifford Road and Upper Main Street as well as the River Mourne in Sion Mills.

The highly toxic plant can produce up to 50,000 seeds which can survive for up to 15 years and can cause major burns if it comes into contact with the skin.

If the sap gets onto the skin which is then exposed to sun, the skin can blister badly recurring over months and even years. This is known as phytotoxicity.

In recent weeks there have been several reports of people sustaining nasty burns due to unwittingly coming into contact with the plant.

Speaking about her motion, Michaela Boyle said there is a need to prioritise additional resources and treatment measures to reduce the spread of the invasive species in the district.

"In Strabane, like many other areas, there has been an alarming spread of Giant Hogweed along the banks of our local rivers, footpaths and road verges over recent years," she said.

"This has led to increasing concerns about it serious health risks evidenced by the many serious burn injuries that have been caused to children and adults alike resulting from contact with this invasive species.

“Like many other local elected representatives I have been making representations to the relevant agencies to take action as and when constituents contact me about Hogweed flourishing in this or that particular area.

“However, I believe that the problem of hogweed spread can only be tackled if there is a planned coordinated multi-agency approach to this problem and one which will ensure the necessary resources and spray treatment measures are made available."

Cllr Boyle's motion asks council to call on the Minister for Agriculture, Environment and Rural Affairs to formulate a joined up strategy with the Minister for Infrastructure and, in conjunction with council and other relevant statutory agencies "to ensure this growing problem is at last addressed in a pro-active, holistic and effective manner."

Party colleague and West Tyrone MLA., Maolíosa McHugh, has also submitted calls on the issue to both ministers.