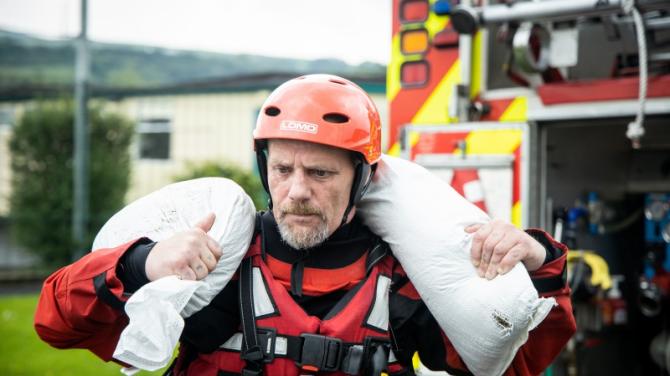 A LOCAL councillor says there is a need for a review of the drainage system in the Ballycolman Estate after flash flooding caused damage to homes.

Residents have been left counting the cost with at least a dozen properties understood to have suffered damage.

Torrential downpours on Friday afternoon caused a manhole to blow its cover sending water hurtling into the gardens and homes of residents living at the bottom of the estate.

Residents, community workers and local rescue volunteers all worked in vain to divert the the flood waters with the Northern Ireland Fire and Rescue arriving on-site to assist.

Mrs Boyle expressed her gratitude to all those who had rallied together to assist the families affected but said there is now need for an urgent review into the flooding which has blighted the area for two decades.

"It happened so quickly. The water just came up through the manhole like a volcano erupting. It was so unprecedented and within minutes, the houses were flooded.

"Thanks to the emergency services, Community Search Rescue and other agencies as well as the community activists and individuals who rallied together.

"It was all hands on deck to try to get peoples properties saved but unfortunately quite a number of houses sustained damage," she said.

Cllr Boyle, who has visited those whose homes which were affected, said the damage is substantial.

"The damage from the deluge is horrendous. Many of the homes affected are those of older people and some who have mobility issues.

"It was heartbreaking to see the horror on their faces that this has happened to their homes once again. To see it happening in that location again, the question has to be asked what is the problem and where does the responsibility lay with?"

Cllr Boyle said the issue has been raised by party colleague Maoliosa McHugh MLA in the form of an urgent oral question to Infrastructure Minister, Nichola Mallon.

"He has asked the Minister to undertake a full appraisal and review of the whole drainage system in Ballycolman area including the functionality of the discharge pumps within the vicinity, which seem to be part of the problem, and to establish once and for all why there is repeated flooding in this area over the past two decades.

"It is a continuing problem. Anytime there is heavy rain or unprecedented storms like Friday, this is what happens and residents need answers.

"It's not just about a manhole being unblocked. It is a strategic, infrastructural investigation that needs to happen, " cllr Boyle added.

Representations to council on behalf of affected residents to ensure payment of the £1,000 Flood Support Grant is processed "as quickly as possible", have also been made.

"Householders who will be eligible for that payment will hopefully have that, possibly by the end of this week/early next week," she continued.

"A number of properties have already applied for that to assist with repairs. I would reiterate that householders have to notify council within seven days of the flooding incident to be eligible for payment.

"I believe that up to 14 houses would have been damaged.

"The money doesn't take away from the hardship people are feeling but anybody who hasn't done so will need to apply before the seven days are up this Friday."

Cllr Boyle said party representatives returned to the area on Saturday to help residents with the clean-up operation and skips were facilitated by council.

Local SDLP cllr, Jason Barr, is also seeking a solution to what is an ongoing problem in the area.

"Myself and Daniel Wray McCrossan MLA have spoken to these residents and reassured them that we will be tackling this issue," he said.

"Massive thanks to the Community Rescue Service (CSR) and Three Rivers Search and Rescue for attending the scene and offering their help to the residents and also the Fire Service for the swift response. Great to see the community pulling together in the help of others in need."

Sand bags were subsequently delivered by Search Team Northwest volunteers to guard against any further flooding but thankfully there was no repeat incident.

At yesterday afternoon's (Tuesday) meeting of council's Governance and Strategic Planning Committee, councillors agreed to a proposal to write to NI Water expressing concern over the flooding and to seek solutions to the issue.