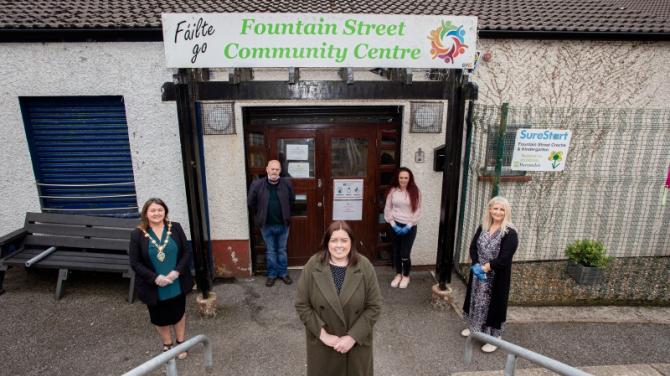 THE strength of community spirit and support by local groups amid the coronavirus pandemic has been praised by the Minister for Communities.

During her first visit to the town as a Stormont Minister, Deirdre Hargey said she has been impressed by the work being carried out by community organisations across the district during the COVID-19 crisis.

Minister Hargey visited a number of groups in the area on Friday to see first-hand how they are assisting the most vulnerable.

Her first stop was the Grassroots Café and Food Market. Thereafter followed a visit to Strabane Community Project at St Pat's Hall where the local food bank has been operating from and then Fountain Street Community Centre.

There she met with community representatives who have been active in assisting vulnerable people during the ongoing health crisis.

The centre recently raised an impressive £10,000 for the Altnagelvin donations appeal and has been active in assisting the department’s emergency food box delivery scheme.

Ms Hargey also met with the Strabane Area Scrubs group who are operating from the centre and working to produce scrubs to assist medical and caring staff in desperate need of Personal Protection Equipment (PPE) supplies.

Extending her thanks to all those involved in the community support effort, the Minister also pledged to continue to support the vital work and for as long as is needed during the crisis.

"I think what they have really done during this pandemic is really shine a light on the work that they have always done.

"When times get tough communities pull together. Our greatest asset - whether it's in a village, a community in a city - is our people.

"We're really seeing the best of people in the midst of this pandemic and particularly working class people working in solidarity to protect those who need it the most.

"We're seeing sports teams, church leaders, political parties and community activists all pulling together for a common goal. I think coming out of this then we need to look at that in terms of the type of society we want to create.

"They are the big things coming out of this around the type of society that we want to create and that has to be about embedding a rights-based approach at the heart of what we are doing both in government, at a council level but also within the kind of economic system as well and that's something that I am committed to doing," she added.

“I was delighted to be able to give the Minister an insight into the community effort here in Strabane and the surrounding areas,” she said.

“The response to the crisis here has been swift and effective in addressing the immediate needs of those who have been worst impacted.

“I have been visiting groups across the city and district over the past few weeks and I have been quite overwhelmed by the work I have seen and the creative and effective ways people have managed to overcome the challenges to bring aid to the vulnerable," she said.

“To see the compassion and dedication of the hundreds of volunteers who are giving so generously of their time is just heartwarming and Minister Hargey was so impressed by what she saw here."

As well as visiting the local community response groups the Minister also called in to the local Social Security office where she had the chance to hear from staff who have been working to assist the public.