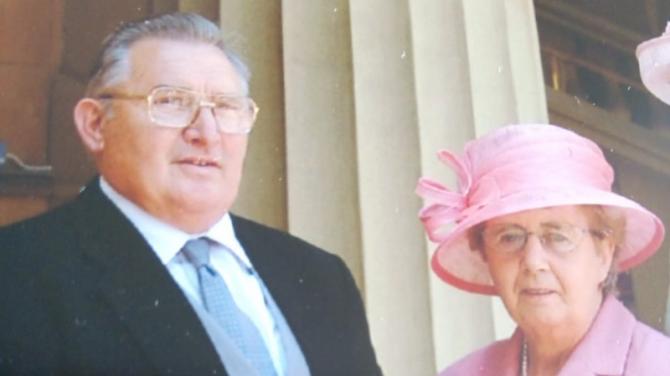 The heartbroken nephew of popular Ardstraw couple, William and Madge Finlay, who died within 24 hours of each other after contracting coronavirus, has paid tribute to the devoted husband and wife.

Madge, aged 82, passed away on Thursday night of last week at 9pm, and William, 84, some 20 hours later, at Altnagelvin Area Hospital, Londonderry.

A testament to the highly thought of couple were the mourners who lined the village of Ardstraw - observing social distancing rules - as the couple made their final journey together, with the hearses making their way side by side to Ardstraw New Cemetery on Saturday.

Mr and Mrs Finlay were married for over 50 years and were inseparable, said their nephew Robin, who described William as a father figure, after his own dad - Ivan - passed away in October 2001.

"He was my go-to man. Any problem, he would have sorted it. Both William and Madge were very good support to me and my mother," said Robin.

"We don't know how they got this awful disease, but it's out there and that's what people need to realise."

Robin wants to stress that it is "extremely important" that everyone stays at home and not to get complacent during this incredibly challenging period.

It was extremely painful for the family that they weren't able to hold a traditional funeral for the couple.

"We drove behind the cortege. There were only six people allowed at the graveside and my brother Nigel laid them to rest with the undertakers as well as my cousin Jason and Brian Stewart," said Robin.

"Rev David Reid (Ardstraw Presbyterian Church) carried out a nice and quick service for them. It was nice that they could both be buried together. They went side-by-side to the graveside and that was lovely.

"They are buried beside William's mother and father, his brother Ronnie and uncle Mervyn - they are all there together."

In ordinary times, this would have been a huge funeral, but there will be plans put in place to hold a memorial service sometime in the near future.

"The many phone calls have been unbelievable; the phone hasn't stopped for days," added Robin, who praised the local community for their support in these difficult times.

"They were two great people in the Ardstraw community. They did a lot for the area; they were involved in a lot of groups and organisations. If anyone needed anything, William always had the answer."

William - who was heavily involved with the Royal British Legion in Castlederg and had served with the Ulster Defence Regiment for over 20 years - first became unwell two weeks ago, but he didn't present with the symptoms usually associated with coronavirus.

"A fortnight ago he was okay but wasn't feeling right, so he went into the doctor to get a prescription," explained Robin.

"The next day he was bed-bound. A couple of days later he got very bad and his antibiotics were changed to see if it helped. But he continued to deteriorate badly; he had lost the power of his legs.

"The doctor arranged an ambulance to bring him into the hospital. His wife suspected Covid-19 and unfortunately, when he got into hospital he tested positive for the disease."

Madge had an underlying health problem and the family first began to get worried when her oxygen levels decreased. Once in hospital, she, too, quickly deteriorated.

Robin said they had a long and happy life together. William had recovered from some ill health last year.

"Unfortunately last year he went through a big operation - an aneurysm - and we thought that would take his life. But he pulled out of it and came out stronger. He was out driving his wee Swift car again and keeping busy.

"The Legion was his life. And he was the band major for Ardstraw Pipe Band until it sadly folded a couple of years ago."

William, who was a lifelong contributor of the Tyrone Constitution newspaper, had been one of the founding members of Ardstraw Pipe Band.

His friend, Bertie Keys, who was a leading drummer, enjoyed some happy memories with him.

"Willie was the instigator of the band; he looked after the youth, the uniforms and all that," said Mr Keys. "He had been doing that since way back. He was a great man for the pipe band. He looked after the band his whole life.

"I have some great memories with Willie. He would always have looked after you. Anything I ever needed, I always got it. It was never a problem for Willie.

"I couldn't believe the news of his passing. Saturday was a very sad day for the whole village. Willie did a lot for everybody, not only the band."

Whatever was happening in the community, William wanted to be apart of it. Sadly, due to this crisis, there is now a huge void in Ardstraw and a family have lost two people they dearly loved.

The couple's deaths are a reminder of the seriousness of the crisis, said West Tyrone MLA., Tom Buchanan, who expressed his deepest sympathies to the family.

"Willie and Madge's death within hours of each other is a devastating blow to the close-knit community of Ardstraw and has sent shock waves throughout the entire district," said Mr Buchanan.

"While we have heard of this happening in other places it is much more real when it comes to our own area and I know the wider family circle will be devastated at this difficult time when the community support is somewhat restricted due to social distancing.

"The death of Willie and Madge Finlay is a timely reminder to us all of the serious nature of coronavirus and the need for each one to follow the guidance from the health professionals to stay at home, wash your hands regularly and only go out if it's an absolute necessity.

"At this tragic time, I wish to convey my sincere and heartfelt sympathies to the family at this time of great loss, trusting they will know God's strength to meet the days to come."

Also paying tribute, was Castlederg area councillor, Derek Hussey, who described their deaths as a ‘great loss’ to the entire community.

"I had known Willie and Madge Finlay for many years and there can be no doubt that their passing is a great loss to the entire community, but particularly to their own family circle to whom I extend my sincerest sympathy.

"Willie and Madge were two of the 'cornerstones' not alone of the Ardstraw community but of our local Royal British Legion here in Castlederg and will be missed for their positive guidance to many over the years.

"On a personal note Willie was the 'go to person' in Ardstraw and I received many years of wise counsel from him on many issues.