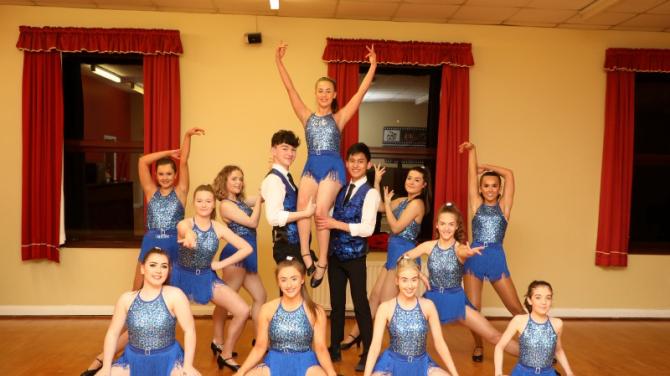 CLASS Act Theatre Group in Strabane has hosted a successful fundraising ‘Guest Tea’ ahead of its participation in a BBC choir competition.

Proceeds from the event will go in aid of the group’s upcoming trip to Coventry next month where 40 local young people will be bidding to win the coveted title of the Songs of Praise ‘Young Choir of the Year’ competition.

The Class Act Choir is one of just five choirs from across the UK to have made it to the televised semi-final of the competition after impressing judges with its video entry of 'Mary, Did You Know' which they will perform again at the semi-final next month.

Should they be successful in reaching the final, the choir plans to perform 'Deep Peace', an original song by Strabane's Ronan Doherty.

The choir's members, alongside musical director Ryan Quinn, have been busy practising to ensure they are pitch perfect for the all-important performance.

They have also been busy hosting a number of fundraisers to help cover the costs for the trip; one being a 'Guest Tea' hosted on Saturday night in St Pat's Hall.

Those in attendance were treated to an array of sweet treats and bakes not to mention performances from the incredibly talented Class Act students.

Speaking afterwards, a spokesperson said the event was a "truly brilliant night".

"The atmosphere in the hall was so lovely and relaxing as everyone enjoyed each other’s company. The effort made by one and all was unbelievable.

"A huge thank-you to Brian and his team for setting up the hall and to Sinead and Hannah for organising the draw and to all who contributed to the raffle.

"We are completely overwhelmed by the generosity shown.

"Our young people are getting so much support and the kindness shown by our community is amazing. We are so thankful.

"The talent in St Pat’s Hall last night blew everyone who was there away. Both the singers and the dancers produced unbelievable performances which entertained us all throughout the night," the spokesperson said.

A Justgiving page has also been set up to bolster the group's fundraising efforts.

You can donate by logging on to https://www.justgiving.com/crowdfunding/leah-mccay