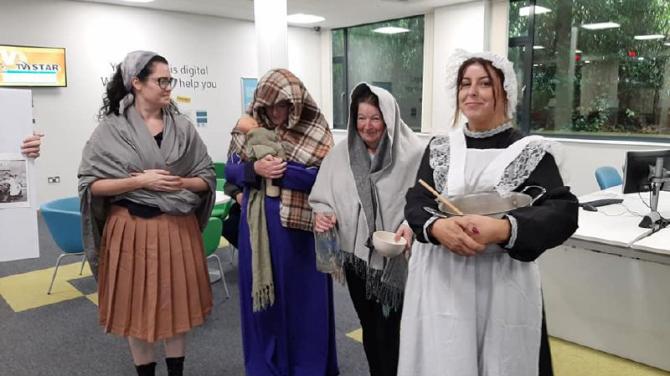 A LOCAL community activist has warned that “draconian” austerity cuts and welfare reform is bringing living standards “back to the Victorian ages”.

She said the reality of welfare reform is that people living on meagre means are struggling to feed and clothe themselves.

“People are starving and people are starving because the benefits that they have been given to live on under the Universal Credit system or under ESA only allow for meagre foods whilst they clothe their children for going back to school. School uniform grants for the most needy are a pittance.

The protest was organised by the Action Against Cuts group - a group of welfare advisors, community activists and concerned local people working as a collective whose aims are to share information and educate those most affected by the cuts and to empower opposition.

It is the latest in a series of public events, protests and direct action taken by the group to highlight the impact of austerity cuts on local people.

Other measures have included a public meeting in Strabane which heard firsthand accounts from local people who have borne the brunt of the Conservative government’s welfare reform as well as a demonstration at a meeting of Derry City and Strabane District Council earlier this year which saw dozens of protestors disrupting the meeting for half-an-hour.

Around a dozen members of the group, including women dressed in period costumes depicting a soup kitchen from the 1800s, took part in the latest demonstration at the Urney Road offices.

They also displayed banners with messages including ‘Universal Credit 2019 = The Poor Law 1834’ and calling for an end to welfare reform. The protest was also broadcast live on the group’s Facebook page and has gained widespread attention.

Speaking to the camera, Ms Stewart explained: “We’re here in Strabane Social Security Office to protest against welfare cuts. We are Action Against Cuts and this is the latest in our direct action against the policy that is implemented to impose draconian measures upon people in our communities; the people who are the most vulnerable, who are sick, are disabled and who are poor.

“We are bringing this dramatisation here to show exactly how government policy regarding Universal Credit, ESA, PIP and Unemployment Benefit are dragging our communities back to the time of the Poor Law.

“In 1834 people depended on workhouses, soup kitchens and in 2019, people on benefits and people on low wages and income are being forced to attend food banks in order to provide for their families and themselves.

The community worker said the protest was peaceful and was not aimed at intimidating staff, who, she said have an “immensely difficult job” to do.

“When do we allow people in this country to go hungry? When was food poverty okay? When did food banks become a fixed feature in society? When did we stand back and allow all this to happen?” she concluded.