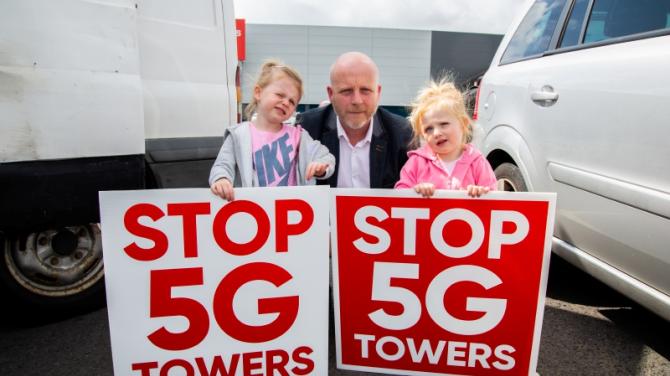 A PROTEST has been held in Strabane at the site of a proposed new mobile phone mast base station.

The protest comes amid plans to erect the new mast on the Melmount Road with locals fearing that while the station is currently planned for 4G it could soon transmit 5G.

The details were provided to all local elected representatives recently and was subsequently publicised on Sinn Féin's social media page with the party seeking the views of constituents.

The proposal consists of the installation of a 17.5m pole with four cabinets on the footway near the Home Bargains store. The company behind the proposal – Telefonica, which runs 02 – says the pole will help improve data speeds and relieve congestion in the area.

“Base stations are low-powered devices which cover approximately half a mile in radius, therefore we have to put bases stations close to our customers. O2 identified that they need to improve coverage to their customers in Strabane and have started a pre-application consultation for a proposed site at Melmount Road.

“All 02 base stations are compliant to stringent international guidelines. Below these guidelines there is no evidence of adverse health effects to any member of the public,” a spokesperson said.

The unveiling of the plans has sparked a huge public backlash with many believing it will pave the way for a 5G network in the town.

This outrage culminated in last Thursday’s protest at the proposed base site which was organised by Strabane man, Ciaran Boyle. He has been researching the effects of 5G for a number of years and believes it poses grave consequences for human health.

Some local politicians were in attendance at the protest and have since moved to make their position on the matter clear.

A spokesperson for Sinn Féin said that following the reaction on its Facebook page, they had contacted the company for immediate clarification over the 5G issue.

“They have come back to say this site would only be used for the current 4G network to relieve congestion issues. This is only a proposal at this time and would have to go through the planning system etc which could take over a year before it would even come to the planning decision stage.

“However, they were not able to give us any guarantee that the site would not be upgraded for 5G use further down the line. We relayed all the concerns that were raised with us and made it clear that there was an avalanche of opposition from the local community to this.

“We further made it clear that we as a party are taking our lead from the local community on this issue and as a result have informed them that we will not be able to support this proposal,” the spokesperson said.

West Tyrone SDLP MLA., Daniel McCrossan, said that following concerns also expressed to him by residents he had sought more information on the plans.

“I have been in touch with Telefonica (O2) and unfortunately, to date, their response to local concerns has not provided sufficient clarity. That is deeply disappointing.

“It’s important that local people are provided with as much information as possible about this development. I understand the desire to keep upgrading to the latest commercial telecoms product, whether it’s 4G, 5G or whatever comes next.

“But we have homes in the west that still don’t have high quality broadband connections. That is the infrastructure challenge of today. People have raised legitimate concerns about these plans and they deserve to be heard.”

Mr McCrossan said he had also requested a meeting with O2 to raise the concerns of locals directly.

“The development cannot run roughshod over the views of residents. And I hope the matter can be resolved,” he added.

Elsewhere, independent councillor, Raymond Barr has also lent his support to the ‘Strabane, Stop 5G’ campaign being spearheaded by Mr Boyle. He has urged the providers to convene an urgent public meeting in the town.

“The surveyors who have been commissioned by Telefonica have indicated an application will be submitted to the local planning authority on August 23. This area is highly populated with schools, care homes, shops and domestic dwellings.

“In reply to my query the spokesperson categorically stated 5G may be added to the station at a later date. I call on Telefonica to convene a public meeting and allow the public first hand consultation rather than consultation by proxy,” he said.

For more information and updates, keep an eye on the ‘Strabane, Stop 5G’ Facebook page.