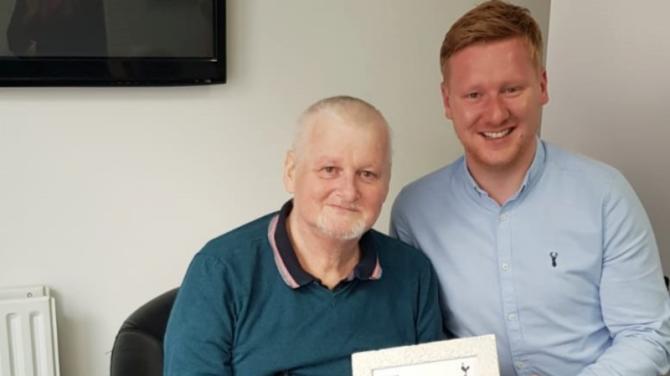 AHEAD of this weekend’s Champion League Final a Strabane man, who is life-long Tottenham Hotspurs supporter, has spoken of his joy in receiving a letter from the team’s manager.

Lisnafin man, Michael McDaid, received a letter from Spurs manager, Mauricio Pochettino thanking him for his support ahead of the team’s match against Liverpool on Saturday night.

The local man, who has incurable throat cancer, was surprised to receive the letter in the post last week.

He has supported Spurs for 55 years and the love for the London side runs within the family..

In it, Mr Pochettino told him: “I am extremely sorry to hear about your current situation regarding your health. “I wanted to personally write to you on behalf of everyone here at Tottenham Hotspur to let you know our thoughts are with you during these difficult times.”

He added: “I should also like to take this opportunity to thank you for your continued and much appreciated support of the club.”

The framed letter has already taken pride of place in Michael’s house.

Speaking after receiving the letter, he said: “I’m grateful for Daniel and his staff for making this happen. I have supported Spurs for 55 years.

“This is a lovely gesture from Spurs and I can’t wait to see us beat Liverpool in the Champions League Final on Saturday.”

The surprise was arranged by West Tyrone MLA., Daniel McCrossan, who explained: “ “One of Michael’s friend came to the office to see if we could help, and my staff member Ann-Marie contacted Spurs to see what could be done.

“The look on Michael’s face when we handed it over was reward in itself.”