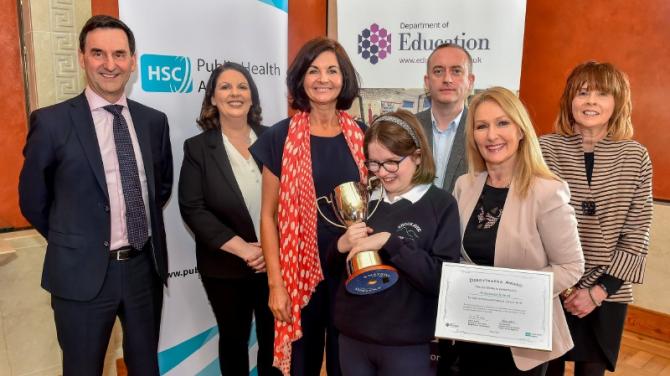 A STRABANE principal says she is both delighted and “humbled” after her school was among four who have been recognised for their exceptional pastoral care at an awards ceremony hosted by the Department of Education and the Public Health Agency (PHA).

Knockavoe School, Melmount Road, was nominated by a parent for the assistance they provided her daughter who has a diagnosis of autism and severe learning difficulties.

Speaking yesterday (Tuesday), Martina McComish, school principal, said: “This award is a wonderful achievement for the staff, pupils, governors, parents and whole community in Strabane and the surrounding areas.

“It celebrates and showcases the dedication and excellent care, love and encouragement shown by staff who help all our pupils to “reach for a brighter future” on a daily basis.”

She added: “We as a school community, are humbled to have been nominated for this award and are hugely delighted to have been selected as the winner!

“Thank you to all the parents who support us as we welcome their children to our school – you make us who we are.”

Presenting the awards, Derek Baker, permanent secretary at the Department of Education, said: “The quality of this year’s nominations are testament to the high level of pastoral care being provided in our schools and reflects the high regard local communities have for their schools.

“Pastoral care is an integral part of the school experience. Young people, as they grow up, face so many challenges and it is reassuring that, for some, their school is seen as a source of reassurance, and support.

“Exceptional pastoral care is not about the everyday support that schools offer their pupils; it is about those schools that go that extra mile, beyond what might reasonably be expected, to support young people’s emotional health and well-being; support that had a genuine positive impact on those who received it.”

“Children who enjoy and thrive at school are more likely to achieve good qualifications, which in turn are more likely to lead to a fulfilling job directly benefiting health and quality of life. I commend this year’s winners for their commitment to pastoral care.”

The Derrytrasna Pastoral Care Award, now in its fifth year, was created by the Department of Education in collaboration with the Public Health Agency in 2014 and seeks to recognise, through nominations, those school communities that have demonstrated exceptional effort in supporting the pastoral care of pupils and their families. Awards are made in the nursery, primary, post-primary and special school sectors.