Hundreds gather at Strabane-Lifford crossing to protest against Brexit 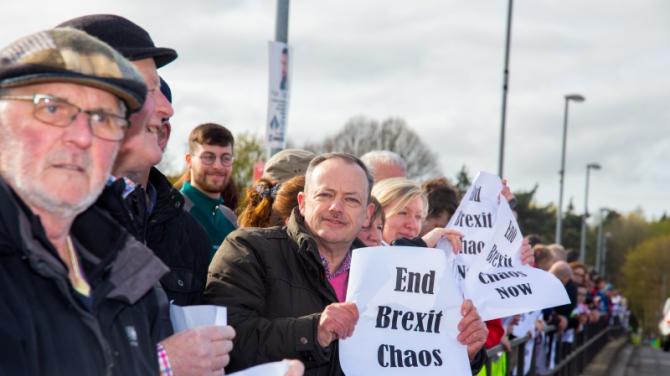 A MASS protest has taken place on the Strabane Lifford border crossing as part of a co-ordinated series of rallies against the return of a hard border post-Brexit.

On Saturday afternoon, people from all sections of the community gathered at Lifford Bridge in support of the ‘Hands Across the Border’ demonstrations which were organised by campaign group, Border Communities Against Brexit (BCAB).

Joining the demonstration at the busy border crossing were politicians, community representatives, business people, trade union representatives, young people and members of sporting bodies. Farmers who are opposed to Brexit also joined the protest and many passing motorists tooted their horns in support of the demonstrators.

And whilst the uncertainty continues at Westminster as Prime Minister Theresa May attempts to get MPs’ backing for her Withdrawal Agreement, the message from the people of Lifford and Strabane on Saturday was clear: there should be no return of a hard border. Many of those in attendance carried posters with anti-Brexit messages reading: “End Brexit Chaos Now” and “No Hard Border”.

The protest lasted for around half-an-hour and concluded with speeches. Among the speakers was local community worker and GAA representative, Aodhán Harkin.

Mr Harkin said: “Strabane is no stranger to economic deprivation and unemployment,” adding that any return of a hard border would destroy border communities.

“The shenanigans in Westminster over the the last three years has proven to the people right across this island what Brexit is. Brexit is a disaster, it is wrecking the economy and it is wrecking communities.”

He also said that he had spoken with medical health practitioners in Strabane who have thousands of patients from Donegal. They, he said, are concerned about the availability of medication.

Also speaking at the event was Martin O’Rourke, SIPTU organiser, who said the the imposition of a hard border could make life “very difficult” for people who commute regularly between the two jurisdictions for social and professional reasons.

Clady native, Michaela Lafferty, represented USDAW at the event. She said: “We are gathered here today to send a message to the Tory government; no return to the hard borders of the past or in the future that you are so desperately trying to create for us.

“The people who live, love and work on this island will not pay the price for your Tory infighting with our workers rights, our citizenship and identity and our peace.”

West Tyrone Sinn Féin MP., Órfhlaith Begley, who was in attendance at Saturday’s protest, said the large turnout showed how angry and “deeply concerned” people in border areas are about their future and the “political circus” at Westminster.

“We are moving closer to a no-deal crash out as a result of the reckless actions of the DUP and hardline Brexiteers who are showing no concern for the damage that Brexit will do to our economy or for the rights of citizens here. The message from those gathered at Lifford on Saturday was clear, the backstop, as included in the Withdrawal Agreement, remains the bottom line as the bare minimum protections for Ireland,” she said.

Speaking after the protest, a BCAB spokesperson described the ongoing disagreement at Westminster as a “staggering mess”.

He said: “The staggering mess that Hard Brexit supporting politicians have managed to deliver in the past week with the failure of the Tory government supported by the DUP, means we have more uncertainty.

“Europe look on bewildered at the lack of cross party consensus and the continual political infighting with horror. We in Border Communities have a clear message, we voted remain and we support the Withdrawal Agreement.

“It is far from perfect, it is not close to being a good a deal as remaining in the EU, but it does give us all certainty for the future.

“Our speakers from across civic society all had the same message; we will not accept a hard border, we demand that our rights be respected and most importantly the Irish government cannot leave the people in border communities and in the North behind. There must not be in the week ahead any dilution whatsoever of the agreed backstop. We will not accept that.”