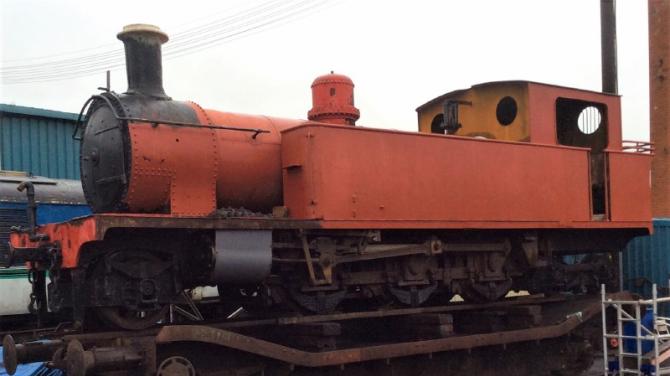 A VETERAN Donegal steam locomotive, which operated from Strabane, has undergone a major facelift and is set to be unveiled at a ceremony today (Wednesday).

The red-liveried 40-ton No 4 Meenglas locomotive, which has been given a cosmetic overhaul by the Railway Preservation Society of Ireland (RPSI) at Whitehead Railway Work, is due to take up residence at the Foyle Valley Railway Museum in Derry- more than a year after it left the city for Whitehead.

A welcome home ceremony is planned for today at 12 noon. Meenglas has a long-standing connection with the North-West having been built in 1907 by Nasmyth Wilson in Glasgow for the Co Donegal Railway.

It operated from Stranorlar to places such as Strabane, Donegal Town and Killybegs. The locomotive was withdrawn from traffic when the Co Donegal Railway closed on the last day of December 1959.

It was stored in the open for some years at Strabane pending failed attempts to relocate it to America.

Dermot O’Hara, manager of Destined, the city-based charity that owns the railway museum, said the occasion would be “a red-letter day”.

Funding for the overhaul was awarded to Destined by the Heritage Lottery Fund. Mr O’Hara said that today’s unveiling will mark the launch of an exclusive video and railway information booklet about the North-West, also heralding the start of a new railway preservation society in the city.

He added: “Destined will be screening an excerpt from a new video made by members of the charity along with local schoolchildren. It involves a series of interviews with local people who either worked on the railway, travelled on it or who have fond memories of it.

“We are also making plans for a major programme to mark the 60th anniversary in 2019 of the closure of the Co Donegal Railway. This will be done in partnership with Donegal Railway Restoration in Donegal Town.”

Meenglas, which was originally constructed as a narrow gauge locomotive is not capable of being steamed at present, but Foyle Valley Railway said that it was not ruling it out as a long-term option.

Peter Scott from the RPSI commented: “The requirement was to restore Meenglas to displayable condition pending funding for full restoration. While the locomotive may not yet be ready for traffic, it certainly no longer looks like the derelict item it was when it arrived at Whitehead.

He added: “Extensive repairs were carried out to the side tanks and bunker, which were full of gaping holes. The smokebox and chimney also had to be repaired, while the cab had to be rebuilt. We made new boiler cladding, a new dome cover, dummy safety valves and whistle - both the latter look the part but won’t actually function.”

The work has been carried out over the past 14 months by professional staff from Heritage Engineering Ireland, the RPSI’s engineering subsidiary, apprentices and RPSI volunteers.

Rebecca Laverty, museum administrator at Whitehead Railway Museum, where the work was conducted said it had proved a big hit with visitors.

“Our visitors have been intrigued to see work in progress on this attractive steam locomotive. It almost looks as though Meenglas is ready to steam down the track! We will miss our little visitor once it goes home,” she added.