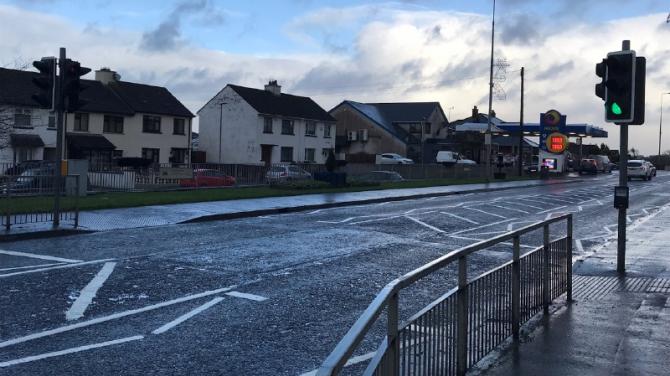 SAFETY concerns have been expressed over a busy stretch of road in Magheramason.

Residents in the village – which sits on the main A5 - have voiced their fears for the safety of pedestrians due to issues of speeding vehicles and the reported breaching of traffic signals at the main crossing point on the road.

Those concerns have been heightened following a collision on Friday morning involving a lorry and a teenage boy. He is understood to have been hit by the lorry as he crossed the road on a red light.

The collision occurred just before 8am. The boy was taken to hospital for treatment but his injuries were not life-threatening, the PSNI confirmed. The road was closed for a period as police and emergency services dealt with the incident but it was re-opened a short time later.

Mark McCorkell is chairperson of Magheramason Community Development Association. The group met with Department for Infrastructure (DfI) officials and officers from the PSNI’S Road Policing Department on Monday to discuss Friday’s incident and the road safety concerns.

Mr McCorkell Friday’s incident is the latest collision on the same stretch involving pedestrians. He is worried that unless action is taken, someone will be killed.

“The young boy involved is recovering well. He is the fourth person to be hit on that road. We had two people hit with no injuries, then there was a lady in her 50s and this young boy, both of them were injured but not seriously. They were hit at those traffic lights also,” he said.

“At night when you press the lights, motorists don’t even recognise them and drive on through. Roads Service and police did a site visit with us on Monday but they say everything is in place that needs to be. We had asked could the speed limit be reduced but it can’t be on account of the houses not being close enough to the road. We’ve also asked for extra street lighting or perhaps a sign a few metres down the road to make motorists aware that a crossing is approaching.

“We have left it in their hands to go away and look at it. Roads Service have said they will conduct a survey which will need to include night-time. It’s a big concern for us especially for the elderly and young people crossing there. We have been asking for something to be done for a while now. There has been a lot of near misses as well. If something isn’t done soon, there is going to be someone killed.”

Alderman Maurice Devenney, who sits on Derry City and Strabane District Council, said he was glad to hear that the injuries sustained by the victim were not serious and he wished him a speedy recovery to full health.

He added: “It’s a huge safety issue for everyone on this road regarding speed and specifically drivers driving through red lights. You really are taking your life in your hands when you’re crossing that part of the road especially with lorries and the larger vehicles.”