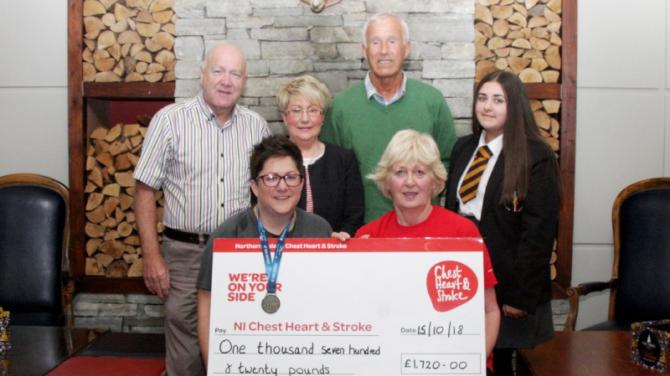 A LOCAL mother-of-two has raised over £1,700 for the Northern Ireland Chest Heart and Stroke (NICHS) charity after taking part in Newcastle Upon Tyne’s 'Great North Run' (GNR).

Grainne Rice (47) ran the gruelling course on Sunday, September 9 and on Monday, she met with representatives of the charity to hand over the grand total of £1,720.

Speaking on Monday, she reflected on her experience: “The run went very well, it was unbelievable. There were five of us from the town who travelled over for the run and we all had different running abilities.

“The atmosphere along the course itself was unbelievable and words could never explain it. There wasn’t a square inch which wasn’t occupied by support, from runners’ family members shouting words of motivation and encouragement.

“There were also lots of bands, music and even a beer stop to keep people entertained. I met 'Elvis' 11 miles into the run and gave him a ‘high 5’.”

She continued: “It was hard at times because I was doubting whether or not I could do it but I took my mind to a time when I couldn’t go running (2016) and I could hear my coach Danny Burns telling me to go for it - it really spurred me on and pushed any doubts I had to the back of my mind.

“When I reached the finish line, my emotions were running high and I never felt so accomplished. I felt like I was on cloud nine and although my family weren’t physically there to support me, they still tracked my progress at home and bombarded me with numerous text messages, congratulating me for completing the run.”

Describing her delight at raising such an impressive amount, the keen runner added: “The funds raised for NICHS have surpassed my expectations and more importantly they will be used locally to help support NICHS within the North West.

“I’d like to express my sincere thanks to everyone for their support, encouragement along the way and especially for their kind donations. For Strabane Radio for covering my story and giving me ‘airtime’ with Nathan to highlight my fundraising, to my hairdresser Joanne Loughlin who held a coffee morning in her Salon in Derry in July and to everyone who attended it, it was gratefully appreciated.

“I’d also like to thank my entire family circle especially Declan, Shannon and Erin who have supported me from the beginning throughout everything, words will never be enough.”

The Strabane native previously took part in the GNR in September 2016 but suffered an Acute Ischemic Stroke a month later on her daughter Erin's 11th birthday. After being housebound for three months, Mrs Rice met with occupational therapist, Eimear Bradley, NICHS, who encouraged her to try out the ‘Moving on Programme’.

She added: “I really enjoyed the programme with Rita and Ash because it gave me a chance to meet with other people who were going through something similar. The programme taught us to accept that we had a stroke and helped build our confidence as well. I completed two blocks of six weeks sessions. The staff at NICHS helped me understand what was going on in my body, mind and how to deal with it.

“In my case not being able to run as a social outlet was incredibly difficult for me and as a result I would have been quite emotional and angry even thinking about it but accepting and listening to my body definitely made it easier for me.”

But two years on, she has been discharged from her stroke consultant and has taken up running with her club ‘Everyone’s a Winner.’ Grainne has also taken part in various 5K runs and credits her coach Danny for being a ‘fantastic motivator’.