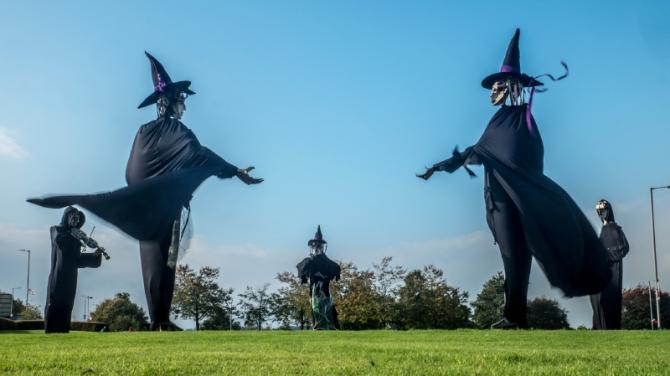 LOCAL people will have noticed some spooky figures emerging from the landscape in recent days from Strabane to Newtownstewart, Castlederg to Bready!

The new artworks of scary witches, creepy spiders, vampires and pumpkins are all part of this year’s ‘Hay Sculpture Trail’ where families can drive around and uncover the eerie trail in the run up to Halloween.

Speaking at the official launch of the Halloween Hay Sculpture Trail, Ashleigh Devine, festival and events officer with council, encouraged people to get out and about and discover the haunting figures lurking around the local area.

“I’m delighted that we’ve been able to bring back the fantastic Hay Sculpture Trail for Halloween 2018!” she said. “Last year was the first year we organised the trail – and it was such a huge success attracting thousands of visitors to the Strabane district over the month of October.

“However, 2018 promises to be even ‘bigger and better’ – thanks to the amazing involvement of local schools, colleges, businesses, play clubs, scouts, community groups, arts groups and farmers.

“Indeed, a lot of work has gone into the figures this year – and it is really exciting for those involved to see them displayed in prominent areas around the district.

“I’d therefore like to take this opportunity to say a huge ‘thank you’ to everyone who has been involved in creating these wonderful hay sculptures – and for adding extra colour and excitement to this year’s celebrations The groups have contributed to this project on a voluntary basis and have exceeded all expectations. I’m therefore delighted that their hard work and commitment has really paid off!

“This is also a great opportunity for families to get out and take a ghost trail to discover the figures and take photos and selfies with them.”

New artworks created for this year’s Halloween Hay Sculpture Trail include the iconic ‘Tinnies’ in Strabane being dressed up as ‘Witches and Warlocks’ with accompanying black cat and frog hay scupltures – a princess who has been changed into a frog!

‘Room on the Broom’ and ‘Harry Potter’ inspired sculptures are also going on display at the North West Regional College’s (NWRC) Strabane campus designed by the children from St Catherine’s Primary School and created by the students at the college.

Newtownstewart has also been taken over by some freaky characters, so watch out! These include ‘vampire’, ‘skeleton’ and ‘bat’ additions to the original hay structures depicting characters from Halloween.

There were originally 13 groups signed up to participate in the 2018 Hay Sculpture Trail but St Mary’s School in Cloughcor have been unable to take part this year –  and therefore there be no hay sculpture at this location.

The 12 confirmed locations for the 2018 Hay Sculpture Trail are available in the Strabane Halloween guide which contains a full events listing for the celebrations and can be viewed at www.strabanehalloween.com