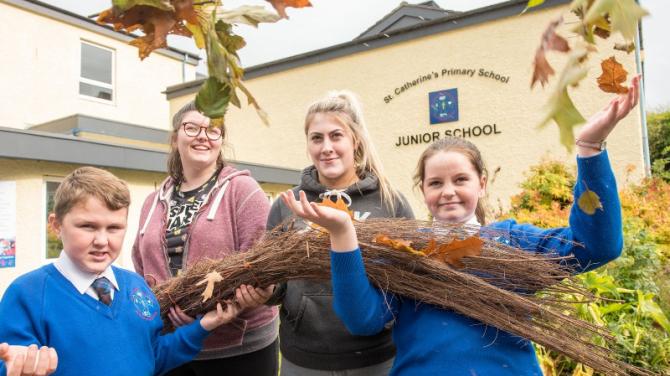 PUPILS from St Catherine’s Primary School in Strabane have teamed up with students from the North West Regional College (NWRC) to create some ‘Spooktacular’ hay sculptures based on characters from the popular children’s books ‘Room on the Broom’ and ‘Harry Potter’ in the run up to this year’s Halloween celebrations.

Derry City and Strabane District Council have also been encouraging community groups, youth groups, farmers and businesses in the Strabane area to take part in this year’s celebrations by creating Halloween themed hay sculptures that will form part of a Halloween Trail at this year’s festival.

Last year saw visitors and locals driving around the district as spooky figures emerged from the landscape – including oversized spiders, bats, aliens and skeletons.

Students studying on the joinery and Early Years courses at the NWRC Strabane campus launched the ‘Hay Sculpture’ project with St Catherine’s PS n support of National Literacy Day. The project is designed to help celebrate the National Literacy Trust’s 25 year anniversary by encouraging pupils of all ages to read more.

Primary one to four pupils from St Catherine’s PS have been drawing characters from Julia Donaldson’s ‘Room on the Broom’ and pupils in primary five to seven some of the key characters from ‘Harry Potter’. The winning designs from each category are being turned into the final sculptures and will be set in the grounds of the NWRC Strabane campus for all the children and their families to come along and view.

Principal of St Catherine’s PS, Bridget Wilders, said: “We’re really delighted to have been involved in the ‘Hay Sculpture’ project and to be collaborating with students from NWRC’s Strabane campus. Indeed, it has been great to see the excitement and enthusiasm of the children as they have worked on this project.

“It’s also brilliant to see the pupils’ designs take shape and evolve into the finished product!”

NWRC Strabane campus manager, Anne Cunningham, added: “Students from the joinery and Early Years courses have been delighted to team up with pupils from St Catherine’s – and have really enjoyed the experience. North West Regional College is committed to engaging with young people in the area and we hope to continue working on projects similar to this, particularly in support of campaigns such as National Literacy Day.

“This is an amazing project which I have no doubts will add to the excitement of this year’s Halloween celebrations in Strabane.”

Several ‘spootacular’ sites have already popped up around the district with displays in Ballymagorry, Newtownstewart, Bready and at Strabane’s ingfamous ‘Tinnies’ sculptures.

Ashleigh Devine, festival and events officer at council, says the return of the Hay Trail in 2018 promises to be even bigger and better thanks to the involvement of local schools and businesses.

“It has been really great to see the collaboration between St Catherine’s and NWRC this year – and I’m delighted we’ve been able to bring the Hay Sculpture Trail back for Halloween 2018. We’ve also had amazing interest in this year’s Hay Trail with such a wide variety of groups getting involved – including schools, colleges, local businesses, play clubs, scouts, community groups, arts groups and farmers already signed up,” she said.

“Last year was the first year that we did this – and it was a great success attracting thousands of visitors to the Strabane district over the month of October.

“We’re therefore delighted that so many people and groups have embraced and supported this year’s trail. Indeed, it really is a fun initiative, a great opportunity to promote the area and local businesses, while also bringing the community closer together.”

This year’s Halloween programme is organised and funded by Derry City and Strabane District Council with support from the Tourism Northern Ireland International Fund. For further information on the Hay Sculpture Trail and other Halloween events in Strabane visit www.strabanehalloween.com