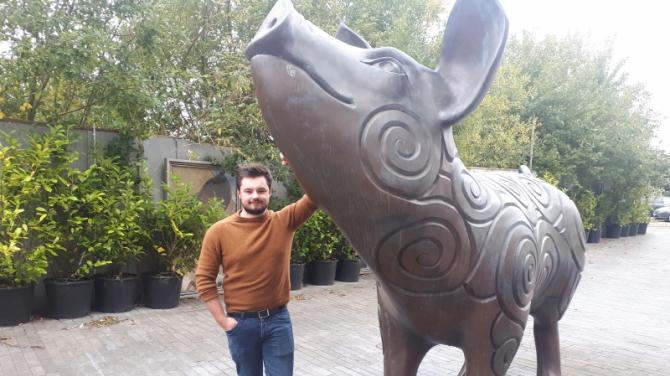 The 25-year-old Newtowncunningham native who now resides in Strabane with his wife, Nyaomi, wrote the play last year after ‘tinkering with many ideas’.

Speaking to the Strabane Weekly News this week, he explained: “I was on the computer writing another piece at the time based on Irish people migrating to America and I thought what if someone couldn't speak back then?

“I then started researching into how people with disabilities were treated back in the 1700s which wasn't very well as you can imagine in a very religious Ireland at the time. The people were believed to be cursed if they were born and couldn’t speak.

“So I thought this is really interesting and would make a great story and I knew I had to tell it. It’s (Silence) a work of fiction obviously and isn’t based on any real accounts as there wasn't any at the time.”

‘Silence’ tells the story of Ireland in the 1700s when the first migrants left for America. It follows the story of Lucy, born a mute, her family and friends as they navigate through life.

But this is no ordinary family plight, Lucy's father is abusive, her sister Catherine is trapped and her friend Robert has just returned from the Jacobite rebellion in Scotland and has troubles of his own.

In the piece, the University of Ulster drama graduate explores the harrowing brutality of humanity, the exploitation of religion and the tragedy that so often accompanies love.

“As the story develops people discover that while Lucy is the one who is silent as vocally she can't speak, the rest of the characters also have silence in their lives but of a different kind,” he said.

“They don't talk about abuse that is happening in their family life, their past traumas or their relationships with Catholics and Protestants because back then you didn’t talk about things like that.

“I think it's really interesting and relevant for me because my wife is a Catholic and I’m a Protestant so it posed the question of what would have happened if we were together during those times.

“The play is also very movement orientated. There’s a lot of visual stimulus as people will be talking and behind them other actors will be performing the actions of what's being said. We’re very lucky to have Andrew McCracken on board as he helped make it very visual which added some va va voom to the play. Hopefully it’ll be engaging for the audience and they’ll love it.”

Marketing manager at the local theatre, Emma Devine, said the Alley is delighted to be staging Andrew’s work.

“It’s brilliant to be able to support Andrew’s group because they’re new and starting up. Andrew has also brought other shows to the Alley Theatre before and we’ve had some really good feedback about them and will continue to support him.

“It will also be great to see Andrew take part in the touring circuit as part of the Irish Drama Festivals as it will give him that much needed exposure.

“I would urge everyone to come along to the show and see it because it’s really interesting as the main character is a mute and this hasn't been done before. I hope we have a good turn out for Silence and that everyone enjoys it.”

This isn’t the first time the Bard Theatre Group made up of Andrew Tinney, Laura Douglas, Andrew McCracken, Aoibheann Diver, Katie Harley and Hubert Young have performed at the Alley as last September Andrew directed the ‘Coarse Acting Show’.

The group are also looking forward to touring the circuit as part of the Irish Drama Festival and hope to take their play to England, aiming to get a show or two.