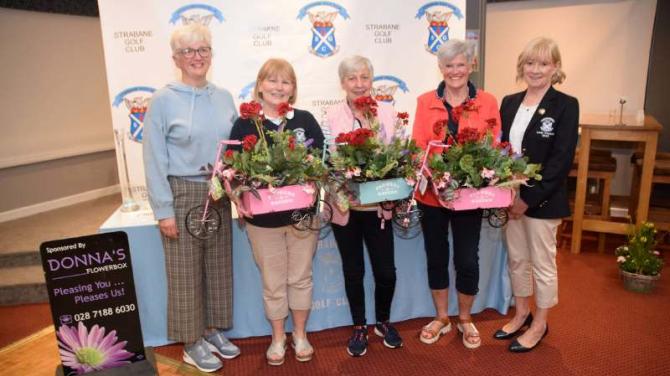 ACTION has continued to come thick and fast at Strabane Golf Club in recent weeks, with a number of events already contributing potential material for an end of season highlights reel.

The weekend past was no different with the course basked in seasonal June sunshine as Saturday’s open, kindly sponsored by Declan Devine Frozen Foods, was swiftly followed by a charity team scramble on Sunday.

In the singles, it was Gus McCay (20) who would make the most of the conditions on offer to post his best of the season so far and take the spoils with an impressive 44pts, some four clear of the next best return.

Mark Quinn (17) posted another good score in quick succession to take the category two spoils after countback with 40pts after ahead of another man in form, Michael McElwee (19), with Jonathan McCrea (19) a point further back.

On then to Sunday, with Foyle Hospice taking centre stage for the annual fund-raising Champagne Scramble. And thanks largely to the mammoth effort put in behind the scenes by Claire Keys and her able support crew, the day turned out to be a huge success!

With the fine weather holding up and a packed timesheet throughout the day, the enthusiasm was palpable from all 40 plus hopeful teams. And in keeping with recent scramble scoring, another fantastic score was required to claim the spoils.

The team of Ciaran Martin, Peter Etherson, Michael McElwee and Ryan McColgan dovetailed perfectly on the day for the format of best drive and recording the two best stableford scores.

Their total of 114pts, averaging more than 6pts per hole, would not be matched, despite a few valiant efforts. The team of Manu Sharma, Ryan Patton, Tommy Barr and Darren Barr were the somewhat unlucky runners-up on the day with a tally that would win many an event of 111pts, with countback required to decipher the rest of the prizewinners following a number of matching returns on 107pts.

For the spot-prizes, Enda Kennedy took the chance to remind some of the big-hitting young pretenders of the importance of finding the middle of the face of the driver (and the middle of the fairway!) when he scooped the long drive at 18, whilst Kevin Gallagher’s approach at 16 to inside a foot was more than good enough to take nearest the pin.

As is always the case with these types of events however, the on course action and the final standings play second-fiddle to the greater cause.

Foyle Hospice is no doubt a charity which sadly most have some experience of at some point in time and this was not lost on the entrants, both home members and visitors alike.

With main sponsorship coming from Eamon McCay at Frylite and Gerry McColgan in the club shop, there was a huge uptake from the wider community to sponsor tees, spot prizes, provide raffle prizes etc.

Their efforts were much appreciated by Claire with thousands raised for the cause which will no doubt help fund their invaluable efforts. Massive congrats to all involved.

Other on-course action has continued with the Liam Curry Memorial series on Monday, with a number of players already booking their spot for the final day at the end of August. Most recently, Aidan Boyle’s (5) fine round of -2 gross for 43pts secured his berth for category one.

Ladies golf also continues at pace, with the weekly Tuesday and Friday competitions, and the membership buoyed by the recent uptake of a number of novice ladies.

Furthermore, it is hoped that the Wednesday night mixed can become a regular fixture again to get the enjoyable format back up and running.

In inter-club golf, last season’s successes have largely continued so far with a number of teams laying down solid markers for potential progress this year, as the club go in search of a few more pennants to adorn the walls of the clubhouse hallway.

Good luck to all teams in action over the coming weeks!

In club fundraising news, the Grand Draw took place a few weeks back and was also a roaring success. Following an immense late push on promotion, gratefully spearheaded by Nigel Houston, and Ciaran Martin providing the digital support, the event was live-streamed on Facebook, with captain Tommy MC’ing on the night.

Congratulations to Shauneen McLaughlin who bagged the keys to a brand new car as the top prize winner, with all other prizewinners listed on our social media platforms.