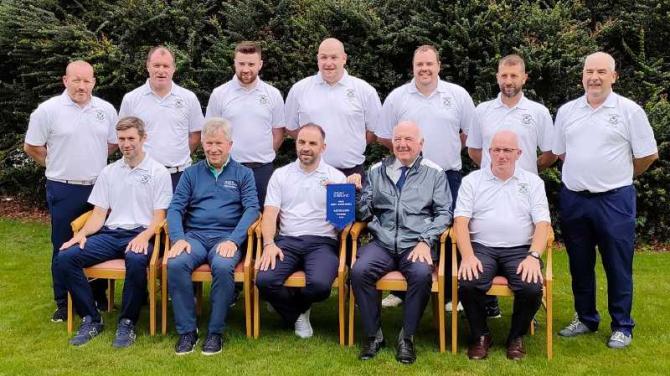 WHILST much of the county will still be basking in the All Ireland success of Tyrone’s senior footballer’s last weekend, spearheaded by familiar face around the club, Cathal McShane, after his critical goal just after coming off the bench stemmed any hopes of a Mayo fightback, it might be time to take stock of the achievements of Strabane GC on the national stage this season.

With regional success coming in the form of two Ulster North blue pennants this year, for Joe Doherty’s Fred Perry Team and Aidan Boyle’s Jimmy Bruen team, members would have been forgiven for thinking it was written that at least one could have been upgraded to a green All Ireland pennant.

Whilst the senior gents came up just short in their quarter-final against Dublin club Westmanstown at Knightsbrook, the Bruen lads went one step further the following week in Shandon Park, Belfast.

After a cracking victory in their own quarter-final against a strong Dundalk side, including a 19th hole decider, the scene was set for a clash with Ulster South champions, Co Cavan Golf Club. This was the seventh notch on the belt for the lads in this season’s gruelling revised format which has been knock-out matches from the off, and required commitment from the players on a fortnightly basis.

Cavan however, no doubt inspired by the show-stealing antics of their own Leona Maguire in the Solheim Cup in the days previous, were keen to leave it all on the course in the semi-final.

Despite a slow start from some of the Strabane pairings, a stirring comeback saw them well positioned in a number of matches heading into the back nine. Unfortunately, the bounce would not be in their favour on the day however, and with two matches beat on the 18th they would succumb to the Cavan men, who would eventually go on to win the final the following day, by the narrowest of 3-2 deficits.

Although the wounds of this defeat may take time to heal, particularly for some more than others, the magnitude of the achievement was highlighted during the presentation of the bronze medals. Golf Ireland President John White was eager to point out that it is no mean feat to reach the last four of some 306 participants across the island at the start of the year.

Whilst that may have felt little consolation in the immediate sombre aftermath of the preceding disappointment, it should not be forgotten by those involved and should hopefully provide inspiration for some of the lesser experienced team members to go a step or two further in the coming seasons.

Club support in the run up to the finals was much appreciated by the squad, with special mention to Aidan Lynch (Sperrin Paints) and Sean Sweeney (Sweeney’s Shop) for the sponsorship of team uniforms and to Sean and his comrade Declan Devine for their support and assistance throughout the week of the finals.

On the home front, Willie Patterson (7) found the best tonic to cope with the despair of the Bruen by posting a best of the day 72 to claim the coveted Club Championship two weeks ago.

Despite essential greens maintenance having to be carried out before the competition, Willie would cap a remarkable season with this blue riband title, one stroke clear of playing partner on the day Rory McColgan (9), another man who will be sad to see the season wind down based on current form.

Top nett honours went to Paul Harkin (22) with a 63, one better than Neil Conroy (10) who has suffered an injury plagued season.

Saturday past hosted the JA Gamble Open and was claimed by Damien Doyle (15) with a fine 42 points, one ahead of James Harron (10). Fred McGavigan (7), Mark Rouse (17), Gerard Bradley (22) and Jack King (28) took the respective categories, whilst Martin McDermott (4) claimed the gross honours.

The Thursday Club also kicked off last week with Liam Patton taking the spoils in a fine vein of form. The respective categories were claimed by Gerry Casey, Gerard Walsh, Johnny Potts and Clark Klam. The proceedings will continue weekly and those interested in still joining the Thursday Club are asked to contact Tommy Forbes.

This weekend sees a large cohort of the membership head to Donegal Golf Club, Murvagh for Mr Kevin Neeson’s Captain’s Outing. The timesheet is posted in the back hall with some slots still available and players are advised that the associated fees will be debited from their member card on Thursday evening.