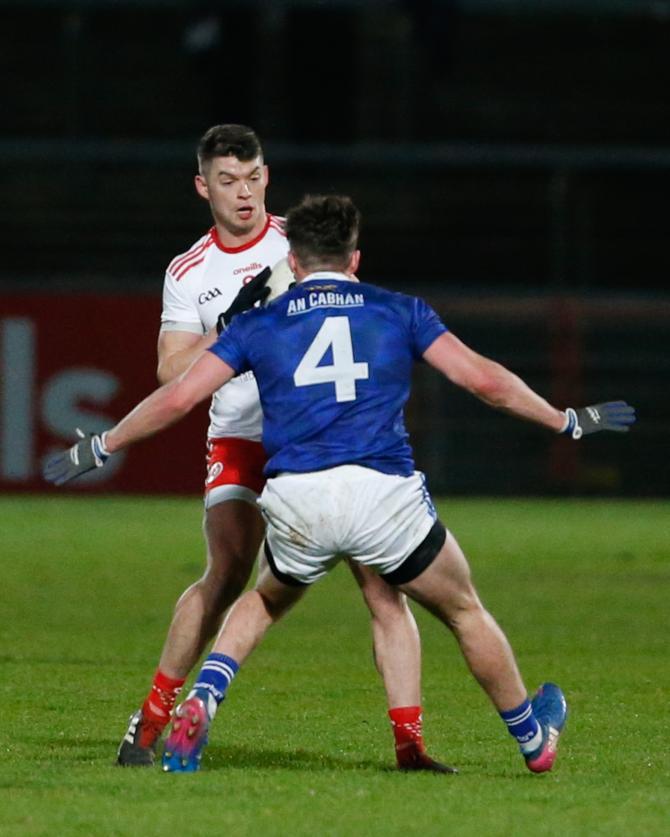 MENTAL fortitude and inner strength are the making of a Tyrone team that thrives on adversity, according to Richie Donnelly.

Red Hand steel punched through Kildare’s defences to claim victory against the odds last weekend, and will be a key weapon in Saturday’s Ulster derby against Donegal.

Short eight of their All-Ireland winning team – four of them suspended – Tyrone’s unbreakable spirit shone through as they carved out a one point win at O’Neills Healy Park to get their League challenge up and running.

“It’s something that we were conscious that we needed to bring, to play for Tyrone, is that mental toughness, and anyone that’s’ in that circle, and done the work to get there, they have already shown that they’re mentally tough and can overcome adversity,” said Donnelly.

“As a team and as a group, we have certainly shown on numerous occasions now that we can rally the troops and rally face adversity head-on and overcome it.

“Last Sunday was no different, and it was very pleasing, with the personnel that we were missing, that we could come out on top and win a game like that against a team that is playing well and moving well and progressing under their new management.

“I’m sure they (Kildare) would have seen that as a huge opportunity, but we also saw it as an opportunity, as a game in which we were in trouble because of the personnel that we were missing.

“But that’s not how every individual person approaches it, or us as a team. I think we approached it as an opportunity to show and express the players and the depth that we have, and the willingness to play for the team and most importantly to get a result for Tyrone.”

Smarting from a nine points defeat to Kerry, Donegal are targeting s bounce-back win over their neighbours at MacCumhaill Park.

It’s a spicy derby fixture to raise temperatures on a chilly winter’s evening in Ballybofey.

“There’s good characters in that Donegal dressing room, they’re good players, and they have shown that with their consistency over the last few years,” Donnelly said.

“I suppose every team has a performance where it’s not up to scratch or they’d like it to be better, but generally after that you do get the reaction, and no doubt that will come, and especially with it being Tyrone-Donegal, that will be a factor as well.

“We’ll just have to be ready for that, and match it and overcome it.

“It’s a tough place to go and get a result in, especially against a good Donegal team.

“We’re well aware of that, but it’s another opportunity for us, and it’s a game that excites us, because we love going those type of games that we know are going to be tough.”

Having completed a one-match ban, Padraig Hampsey, Kieran McGeary, Peter Harte and Michael McKernan are available for this weekend’s tie.

Their return, along with the points gained from last Sunday’s win over the Lilywhites, gives Tyrone reason to aspire to a challenge for the Division One title, rather than a struggle to avoid relegation.

“One or two results can leave you in a place where you can start looking up the table, but we’re very much taking it one game at a time.

“Aside from results, we’re very much focused on getting better, game by game, week by week throughout the league.

“We have started slow but we’re starting to get the wheels turning now, and the focus is on performance.

“If you can put together results and performances it can bring you to a better place.”

The reinforcements that stepped up in the absence of key players demonstrated the All-Ireland champions’ strength in depth.

Donnelly was one of those who came in as a substitute, hitting a crucial point and strengthening his hand in the battle for places.

“I suppose at that stage of the game, it was just about adding a bit of energy, especially to the boys that had worked hard for the 40 minutes previous.

“I’m happy enough with the impact, but still plenty to work on coming into this weekend and beyond.

“It’s a ruthless game in a sense, in that when those opportunities come, you need to take them.

“Albeit it’s February, but it’s still a very important game for certain individuals and for the team collectively, as last Sunday turned out.

“It’s very important to take those chances, for whoever they come up.”