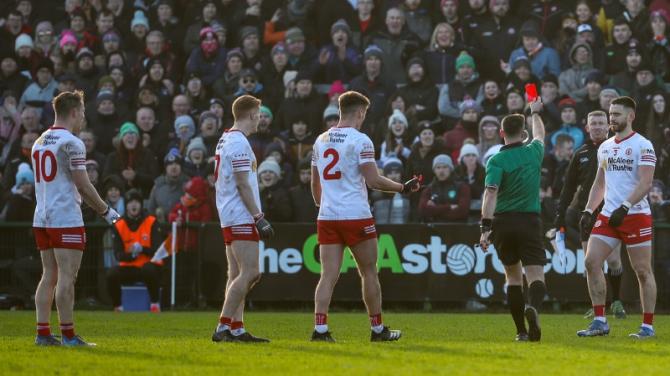 This game will be remembered for the late drama which saw five players – four of them from Tyrone – sent off at the end of a feisty local derby at the Athletic Grounds.

Armagh’s dominant first half display laid the foundations for a deserved victory, leaving the Red Hands without a win two weeks into the 2022 National Football League series.

Now they face into their next outing against Kildare without four key players, due to the straight red cards picked up by Padraig Hampsey, Kieran McGeary, Peter Harte and Michael McKernan.

The All-Ireland champions were unable to contain their in-form neighbours in the opening half, with goals from Greg McCabe and Jason Duffy helping them to a ten points half-time lead.

An improved showing, while playing into the wind, saw Tyrone peg back the deficit to four points, but they had left themselves with too much to do.

With just a point to show from their first two games, Tyrone are now looking towards the bottom half of the table and a battle to avoid relegation.

The late drama that played out in front of a sell-out crowd of 14,328 overshadowed the excitement, fervour and quality of a typical derby tie played contested by two old rivals.

The referee had a busy afternoon, flashing 13 cards. Six players from each side were booked, we well as Armagh manager Kieran McGeeney, and then there were those five reds right at the end.

Armagh approached the contest with no fear, buoyed by the morale-boosting Croke Park performance that had seen them overwhelm the Dubs a week earlier, and they dominated the All-Ireland champions during a slick first half which saw them go 11 points ahead.

While the Red Hands pegged them back to four points late on, time ran out, and the home side was able to hold out for a second win on the trot.

Armagh got off to a flying start with Greg McCabe’s goal after just five minutes, rifled past Niall Morgan from Rian O’Neill’s delightful lofted pass which took out the entire fill back line.

And points from Jason Duffy and Rory Grugan, from a free, had them ahead by five, 1-2 to no score.

It took the Red Hands until the eleventh minute to contrive their opening score, with Darren McCurry providing the assist for Darragh Canavan to land a fine point.

But Armagh could have had a couple more goals, as Stephen Sheridan drove through three tackles to fire in a shot that Morgan did well to keep out.

And the Tyrone ‘keeper had to be on his toes to finger-tip Ciaran Mackin’s sizzling shot over the bar.

Michael McKernan pressed upfield to finish off a move involving McCurry, Peter Harte and Canavan with an accomplished finish, but the Orchard were in complete control, playing this game very much on their own terms, moving with method, assurance and a shared trust.

Tyrone, in contrast, were a shadow of the team that swept to Sam Maguire Cup triumph last September, hesitant, unambitious and lacking in ideas.

Even a massed defence couldn’t hinder the clever Orchard movement that led to scores from Rian O’Neill, Rory Grugan, Aidan Nugent and Tiernan Kelly, as they reeled off four in a row to go seven clear.

Tyrone were still restricted to breakaway raids, one of this ended with Frank Burns setting full back Padraig Hampsey up for a trademark point sliced off the outside of his boot.

But at the other end, O’Neill’s quite magnificent effort made it 1-8 to 0-3, and just when it looked as if it couldn’t get much worse for the Red Hands they conceded a second goal in stoppage time.

Kelly made the ground, feeding Jason Duffy, who stepped around Morgan to plant the ball in the net from close range.

A commanding 2-8 to 0-4 interval lead was no more than Kieran McGeeney’s side deserved, with McCurry pulling a point back from a stoppage time free.

The home side pushed the lead out to eleven points through Jemar Hall before Tyrone began to perform with some conviction, and taking their opponents on in a much more adventurous fashion.

Tyrone gambled with a high press on the Armagh kick-out, and it paid off as they began to unsettle a defence that had previously looked assured.

Niall Sludden, from Peter Harte’s pass, and Kieran McGeary slotted over points, the latter finishing off his side’s best move of the game, which involved Johnny Munroe, McKernan and Brian Kennedy.

And as the Orchard coughed up a string off frees, Cathal McShane struck unerringly from the dead balls, converting seven in the second half alone.

Now Armagh were restricted to breakaway attacks, with O’Neill and Aaron McKay raising white flags, but they went 17 minutes without a score, before Jarlath Og Burns drove through to split the posts.

In the meantime, McShane had chipped away at the deficit, and his seventh conversion trimmed it back to four with three minutes of normal time to play.

Then the eruption that marred what had been an honest if robust sporting contest. Large numbers from both sides became involved at the Drumarg Terrace end line, and when order was restored, there gasps of astonishment from the crowd as five players saw red.