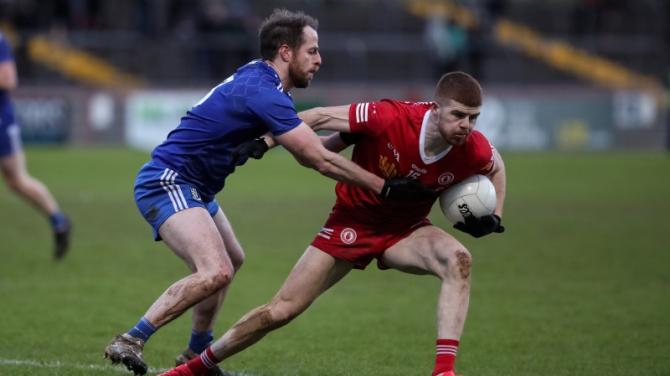 IT was a typical Ulster derby dogfight as Tyrone and Monaghan engaged in a full-blooded battle at O’Neills Healy Park, delivering a compelling encounter that was rich in entertainment for the 7,000-strong crowd and uncompromising in terms of commitment and desire from two sides desperate for supremacy.

The result was a cliff-hanger that probably produced a fair result, although Tyrone fans were somewhat bemused at the decision of referee Joe McQuillan to disallow a late Paul Donaghy point that would in all likelihood have given the All-Ireland champions both points from this NFL Division One opener.

The Red Hands had ten of their All-Ireland final team on duty from the outset, and with more to return as the weeks progress, they can feel confident that they will be leading challengers again this season.

Pre-season work was somewhat restricted, but this performance will have been pleasing to the eyes of manager Feargal Logan and Brian Dooher as they plot another campaign of achievement for their talented and driven squad.

“We probably thought we had won it at the end, with that controversial point or maybe it wasn’t a point or whatever, but maybe we were lucky we survived,” said Dooher.

“Monaghan had a few good chances before that they didn’t take, so maybe all in all, it wasn’t far away from where it should have been.”

Conditions were challenging when the rain and wind whipped up in the second half, but the Red Hand bosses were pleased with the resistance shown by their side.

“The second half got very stormy and you could sense the breeze blowing down the field it made it very difficult to play good football.

“Some good points we can take out of it and some things to learn for the next few days and see how we move onto Armagh next week.”

Paul Donaghy’s disallowed point at the end was a major talking point, and looked like a winner until referee McQuillan stepped in to decide otherwise.

“I was chatting to Paul there and Paul thought the ball was over the bar before anything happened, or before Brian challenged Rory Beggan in goals,” said Dooher.

Not for the first time, were denied by the finishing skills of Conor McManus. The former All-Star came off the bench to shoot a 64th minute equaliser, and it was enough to secure an opening day point for his side and confirm a third draw from the weekend’s schedule of four NFL Division One ties.

It was the fifth time the sides had been level, and a share of the spoils was no less than Monaghan deserved.

It was an experienced Tyrone team that took the field, along with an impressive debutant in Nathan Donnelly, as well as a first League styart for Conor Shields, who worked hard throughout, and in the end they were somewhat fortunate to see a string of shots from their opponents sail wide of the posts in the swirling wind during the second half.

Shields provided the assist for Peter Harte’s opening point, with Kieran Duffy bringing the sides level as he finished off a patient move as they probed for openings against a fortified and well organised defence.

The home side defended with discipline, frustrating their opponents with turnovers, blocks and tackles, some excellent work from Padraig Hasmpsey, Michael McKernan and Conor Meyler, breaking for Darren McCurry to win a free for Cathal McShane to convert.

Rory Beggan started and finished a Monaghan move, launching the attack with a perfect restart and converting the free that ensued.

But the energy of Meyler, Kieran McGeary and Niall Sludden had the Red Hands on the move again, with three scores on the spin, including a neat effort from newcomer Nathan Donnelly.

A terrific battle between McShane, making his first Tyrone start in almost two years, and Conor Boyle went in favour of the Monaghan full back in the initial stages, but Red Hand front man grew into the game, linking with supporting runners and converting a couple of frees.

And goalkeeper Beggan came off his line to punch a Meyler delivery away from McShane.

Dessie Ward and Ryan McAnespie probed from deep, and the Farney men cut back the deficit to two through Shane Carey and Micheal Bannigan.

There could have been more damage had McGeary not executed a superb block Jack McCarron, while at the other end, Dessie Ward put in some telling challenges to half Tyrone’s progress.

Monaghan also came close to getting a goal, but Gary Mohan just failed to stretch far enough to get a hand to a Niall Kearns cross.

It was Tyrone who held a slender two points lead at the interval, 0-6 to 0-4, after Sludden arrowed over a fine score in stoppage time.

Monaghan’s strong pre-season began to show as they pressed forward, shooting four points without reply to turn a three points deficit into a one point lead by the 50th minute.

And it was a point from play by their goalkeeper Rory Beggan that gave them the led for the first time, his run around the right flank picked out by Dessie Ward for an accomplished finish from 35 metres.

His opposite number Niall Morgan also added to the outfield numbers, carrying the ball beyond halfway to send Darren McCurry through for a point, but it was Monaghan who looked the most likely in that third quarter as Conor McCarthy and Ryan McAnespie found the target as space opened up.

The goalkeepers traded points from frees, and McCurry added another from a placed ball to regain the lead for the Red Hands.

The wind whipped up in a direction that favoured Monaghan, with driving rain adding to the difficulties, and Morgan was now struggling to pick out his own men from kick-outs.

McManus finally did find the range to ease Seamus McEnaney’s side ahead, and Tyrone went down to 14 men when Footballer of the Year Kieran McGeary was sent off following a second booking as he was penalised for a high tackle. Substitute Paul Donaghy kicked what looked to the be the winner in stoppage time, but the score was ruled out for Brian Kennedy’s challenge on goalkeeper Beggan.

And right at the end, Monaghan had a chance to steal it, but Beggan opted not to go for the posts from a free, playuinmg the kick short instead to Conor Boyle, but his effort dropped short, and the opportunity was lost.