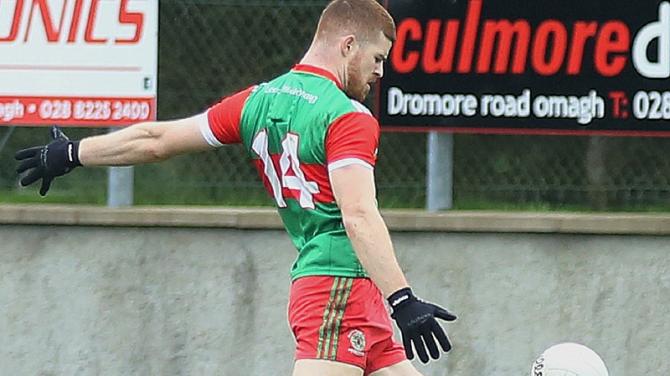 CATHAL McShane was on fire as Owen Roes charged into the LCC Group Intermediate Championship semi-finals with an impressive four points win over Clogher.

The Tyrone star hit nine points at Killyclogher to inspire his side to a place in the decider, where they will meet Gortin in a north Tyrone derby.

After a slow start, the men from Glenmornan took control, defending in numbers and attacking at pace from deep and picking off the vital scores.

Wing back Conall McCormick epitomised their approach, playing a major role in the defensive effort and pressing forward to help himself to four quality points from play.

“We’re just happy to get through. It was a wee bit shaky at the start, but we know what Clogher are about, they’re a great team,” said McCormick.

“But we had a game plan and we stuck to it, we have to trust the process.”

His four point salvo played a major part in getting Owen Roes through to the last four, but he insisted it wall all about doing his bit for the team.

“It’s all about working for the team, and if I can get that wee bit of space, I can get going on the wing.

“You get forward when you can, back when you have to and just work hard for the team.”

But the real scoring sensation is Tyrone star Cathal McShane, whose nine points capped a brilliant performance at full forward.

“Cathal is class. He had that bad injury and he came through it, and he’s unreal,” said McCormick, who also paid tribute to the experienced Brendan Boggs.

“Boggs is a great man to have in the team, he’s getting better with age, that man, and it’s class to have him.

“The younger boys like myself are learning from the likes of Brendan, and it’s great to have them men in the squad.”

Former Donegal defender Paddy Campbell has taken the club to within two games of senior football in his first year as manager.

“Paddy came in this year and he’s a great addition and he’s pushing the thing on.

“We’ll just take it game by game, that’s all you can do, just prepare for the next game and keep working hard.”

Conor Shields landed a long range point to get Clogher going, and a Ciaran Bogue mark doubled the advantage in the fourth minute.

Cathal McShane won the free that he converted himself to open the Owen Roes account, and the sides were level by the eighth minute when midfielder Seamus Dooher drove through for a point.

But the north Tyrone men were also defensively sound when out of possession, dropping 14 men behind the ball.

The Eire Ogs had to work hard for their next score, a Bogue free, but they were soon on the back foot again.

Ryan Devine sent in a dangerous ball which Conor O’Neill just failed to connect with, and Clogher goalkeeper Rory McElroy was able to gather and clear.

And Clogher countered for Conor Shields to loft over a delightful score, finishing off good approach work from Matty Callaghan and Conor McKenna.

But the Valley men allowed lost their defensive shape and allowed McShane too much space to collect Stephen Harper’s sideline ball and go through for a point just before the water break.

And the men from Leckpatrick continued to press, with Conall McCormack breaking through two tackles to send over a score, followed by an eye-catching effort by Tyrone star McShane for his third.

They made it four on the spin, with McShane adding another couple, one from a free, and with Brendan Boggs organising a well drilled defensive formation, there was little room for the Clogher men to work with.

A frustrating quarter did finish on a positive for them when goalkeeper McElroy converted a ’45, but they trailed by 0-6 to 0-5 at the interval.

The game was swinging in the direction of the men from Glenmornan, and they continued to press from dep to find scoring opportunities, with Michael Dooher sending McShane in for a score, followed by another McCormick point.

And former All-Star McShane added to his mounting tally from a free, to leave for points between the sides with just four minutes played in the second half.

The frustration continued for Clogher against an opponent that regrouped instntluy after each score, retreating deep into defence to set up an almost impenetrable wall.

Sean Bogue did get in for an Eire Og point, but that brought only brief respite, as their opponents responded with another volley of four scores.

Forced to go long with the kick-out, they were instantly in on goal from Ryan McShane’s booming restart, with Michael Dooher sending McCormick in for another well taken score.

And with Seamus Dooher fielding majestically at midfield, they continued to attack, two more McShane scores and a Damian McCrossan effort pushing them seven clear.

Mark McConnell drifted deep in an effort to ignite a Clogher response, and they did pull back a point when Matty Callaghan, Jamie Callaghan and Sean Bogue combined for Barry McKenna to split the posts.

McShane was in the mood, and following the second drinks break he curled over a magnificent point to give his side a further lift, with veteran Boggs also pushing forward to pick off a score.

The Valley men responded with a fine individual score from Ciaran Bogue, and they pressed strongly in the closing stages, with Jamie Callaghan drilling over a point.

And they closed the gap to three points with a 58th minute goal. Mark Bogue drove a long ball into the danger area, and when the Owen Roes defence failed to clear, Barry McKenna punched to the net.

But they were unable to salvage the day, and McCormick’s fourth from play sealed the win for Owen Roes.