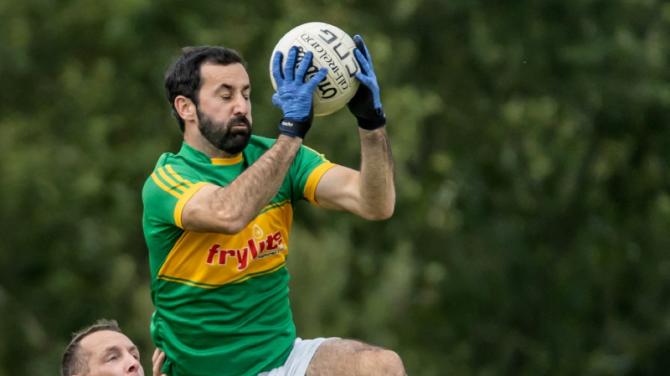 JOHNNY Lafferty came off the bench to hit a stoppage time goal to seal a narrow win for Urney and with it a place in the LCC Group Tyrone Junior Championship semi-finals.

A close-fought game at Fintona went right to the wire, with Killyman threatening an upset, before the St Columba’s rallied for the decisive scores late on.

Mickey Donnelly’s goal pushed Killyman into a four points lead early on, and while Jamie McAleer’s strike had Urney ahead at the break, they fell behind again in the second half, and needed that late surge to secure the win.

Fergal McNulty’s influence was crucial for Urney as he drove his side on time and again, inspiring those around him to greater things.

Urney attacker Jamie McAleer expressed his relief at emerging with a narrow victory over a dogged Killyman side, thanks to that late strike.

“Killyman took us right to the death there. They battled hard. We knew what they would give it, from watching the Clann na nGael game,” he said.

“They started off slow against Clann na nGael, I think they were five or six down, but they battled right to the end, so we knew that this game would go to the death.”

McAleer never doubted that the St Marys’ would come with a huge challenge, despite their struggles in League football.

Killyman had scored their first Championship victory in seven years in the previous round, and went into the game with a genuine belief that they could go one better.

“Once you win one, you want to win again. I’m sure they got an absolute brilliant buzz after winning the first game,” said McAleer.

“So that’s why they wanted to see that again.”

It was a real roller-coaster of a contest, and Killyman gave it their all, threatening a shock as they went ahead in both halves.

But Urney final got over the line with that late goal.

“We knew that they were going to put the ball in long, and we had worked on it in training,” said goalscorer McAleer.

“But from where I saw, it might have been a wee bit lucky, the ball just kinda went through.

“But it was great character from the boys. I think we went behind twice, a man down. We got it back, and loads of experience coming off the bench got us over the line.”

And he paid tribute to former Tyrone attacker Lafferty, whose stoppage time strike sealed the win.

“Right place, right time, Johnny knows where the net is, and hopefully we can get more out of him the next day.”

It all looked encouraging for the north Tyrone men in the early stages as they eased ahead with scores from Kyle Henry and Colin Campbell, but it was Killyman who seized control of the contest.

After Ronan McVeigh had steered a free kick between the posts for their opening score, Mickey Donnelly added another.

And it was Donnelly who got on the end of a Gary Paul Hamill pass to finish to the net for a shock goal. Enda McGahan added a point, and the St Mary’s were in dreamland.

But Urney refused to panic, and systematically played their way back into the game, with Ryan Henry converting a free, and Sean McGown clipping over a point as they got themselves back in front by the first water break.

Donnelly brought the east Tyrone side level again, but Urney responded with a goal, created by Jake Lafferty and finished clinically by Jamie McAleer.

But McVeigh had the sides level again, thanks to the creativity of Enda McGahan and Eamon Donnelly.

Urney raised their game in the closing stages of the opening half, however, with Henry, McAleer and Kyle Henry all on target to give them a three points lead at the break.

Killyman had a golden goal chance just after the restart, when substitute Ryan Mc Kenna broke through, but he sent his shot over the bar.

It was a difficult spell for Urney, but with skipper McNulty dropping back to the help out in defence, a steadying influence was important.

Nevertheless, the St Marys’ kept plugging away, with McGahan steering a free between the posts, before McAleer responded from a placed ball.

And they struck for a second goal, a loose ball falling to full forward Ryan McKenna, who drilled his shot to the net, and when McVeigh tagged on a free, they were a point ahead.

Urney were forced to play the final quarter with just 14 men after Martin Owens was shown a straight red card, but they displayed character and belief to dig themselves out of a crisis.

They pressed strongly, and McAleer levelled from a 13 metre free late on, before Chris Bogle nudged them in front.

And in the closing moments, the game was made safe when substitute Johnny Laffertyy finished McAleer’s delivery to the net.