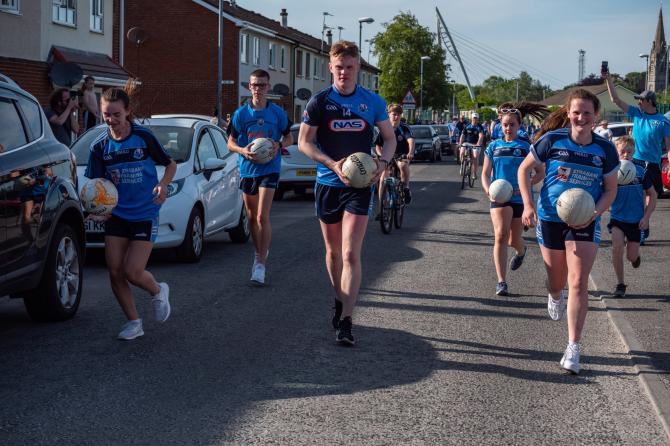 A CHARITY 'solo' challenge by a Strabane GAA club has raised a grand total of £22,500 for two local causes.

Local streets were transformed into a sea of blue as the 'Sigersons Solo Strabane' fundraiser came to town last weekend.

Organised by the club to raise funds for the Koram Centre and Knockavoe School, the challenge involved participants soloing balls around the town within social distancing guidelines.

The event featured the outgoing Mayor of Derry City and Strabane District Council and Sigersons member, Michaela Boyle, club members as well as representatives from the school and the mental health charity.

The initiative had already surpassed its initial target of £5,000 prompting the club to generously contribute £1,000 themselves and they did so again when the total reached the £10,000 mark.

At 1pm on the grounds of Knockavoe School the Mayor, on her last official event and principal, Sharon Cassidy got proceedings underway.

They passed the ball onto pupils and families from school and Brian McMahon led the way into Melmount Gardens to begin the solo around the town.

Crowds came onto the street to support friends, families and Sigersons club members while young and old cheered and clapped as the balls were soloed around the town.

Donations were collected throughout the route which helped to support those that had been made online.

With up to 20 miles covered, the challenge was a truly monumental undertaking logistically and its success was a testament to the amount of effort, hard work and planning which went into the organisation of the day.

On behalf of the organisers and beneficaries, a spokesperson said: "There was a real festival atmosphere and the undeniably fierce support of the people of Strabane shone through.

"Many thanks to everyone for their generosity and support in organising a fundraising event which included all members of our local community.

"The heartfelt response only serves to highlight the very special place that Knockavoe School and the Koram Centre hold in the hearts of the people of Strabane.

"Both facilities will use the money raised to support some of the most vulnerable people within our community."

The club has also extended a huge thanks to everyone involved in helping make the event a success.