McShane stars as Tyrone down Dublin 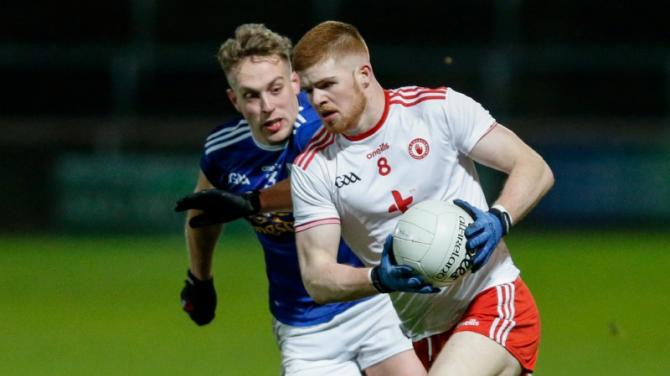 OWEN Roes’ Cathal McShane was the stand out man as Tyrone earned a rare victory over Dublin in an absorbing Croke Park clash.

The 14-man Red Hands defended heroically and struck for scores on the counter-attack on a memorable evening at GAA Headquarters.

The result gives Mickey Harte’s side a chance of reaching the Division One final, a prospect that would have been unthinkable just a few weeks ago, when they were still looking for their first win after three rounds of games.

A remarkable resurgence has seen them take seven points from their last four ties, including this morale-boosting result against the league title-holders and All-Ireland champions.

Tyrone recovered from two major setbacks to carve out a positive outcome. After conceding a goal inside the opening five minutes, they fought back with resilience, and after having Niall Sludden sent off on yellow/black cards. They conceded just two points while playing with a man short for the closing 25 minutes.

Man of the match McShane scored the all-important goal, and finished with 1-4, forging an effective front-line partnership with skipper Mattie Donnelly.

Tyrone introduced a refreshing new approach at Croke Park, mixing their running game with a long ball approach, with the latter paying off generously in the form of several scores, including Cathal McShane’s vital goal.

McShane and skipper Mattie Donnelly revelled in their role as twin target men, using their ball-winning ability to keep the visitors on the front foot, with the pair finishing with a combined total of 1-7.

“When you have players of that stature up front, with that physicality and that ball-playing ability, then you like to give them ball. There’s no point in them being up there and not getting any ball,” said Harte.

“Now again, it’s getting that sense of balance. If you kick every ball in – after the first three or four were quite successful, Dublin were very much more conscious of it and cut out a number of them.

“I suppose we have been known as a running team for a few years now, and we do need to bring a bit of variety to our game, and perhaps this is one way of doing it.”

Tyrone also kicked three points from offensive marks, but Harte wishes to reserve judgement on the retention of what remains an experimental change to the playing rules.

“I wouldn’t like to pass judgement on it yet, I’m not quite sure. I don’t see it as being very detrimental to the game, but I’m not sure if it does a lot for it either,” he said.

“Well, it’s there at the moment. It’s a rule that’s in for this National League, so if we have the players who are capable of winning that kind of hard ball, or kicking it a distance, that they’ll not be pushed around, it’s good to use it.

“Yes, that makes it that you don’t have to be quite as accurate as if you’re playing small men who are maybe very skilful out-and-out forwards that you need a very precise kind of ball for them. You can put a sort of 50-50 ball in and these men will fight for it and can win their share of it. So yes, that makes if more of an option.”

Harte was delighted with the application of his players, but cautioned that Dublin are still some way off peak performance.

“It’s definitely very satisfying, but we all know that we’re not meeting Dublin at their peak at the minute, and that’s a fact of life.

“I suppose it appears like the league didn’t matter as much to them this year as it did in previous years, they have enough titles now to be happy with.

“So we wouldn’t get carried away and think that we’ve beaten Dublin at their best.

“But we beat Dublin in a way that we haven’t done in a long time, so it’s very satisfying when you can take on Dublin, even with some players unavailable etc, and to get the win.”

The Tyrone boss was pleased with the manner in which his players retained their focus in the heat of battle.

“It was a battle from start to finish, that was the good thing about it. We were in that battle from the start and we withstood a very early goal that should have rocked us, and would have in the past,” said Harte.

“I think that was the big thing, that we didn’t let that upset us too much. We just rolled up our sleeves and fought back, and I think the players got the reward they deserved, because they put in a serious effort there tonight.”

Just two points separated the sides when Tyrone were reduced to 14 men, with Niall Sludden black-carded, having earlier been booked.

But in the remaining 25 minutes of captivating action, they conceded just two points.

“I think the players sorta’ smelt victory at that stage, and they didn’t want anything to take it from them. They put in a serious shift, and while this was a big loss to us in a very tough battle, they just put their shoulder to the wheel,” said Harte.

“They really put their bodies on the line tonight, and that was great. I asked them to play with a bit of passion, and I certainly got it, so I cannot be anything but very pleased with the way our players performed.”

Dublin struck for a goal as early as the fourth minute, with Cormac Costello finishing off a counter-attack with a low finish past Niall Morgan.

Tyrone drew level by the 13th minute with scores from Mattie Donnelly and Peter Harte, but Con O’Callaghan pushed the All-Ireland champions back in front with their first point of the game in the 18th minute.

Tyrone continued to perform with confidence, unfazed by that early concession, and struck for a goal in the 21st minute.

Richie Donnelly hoofed a low trajectory pass down the middle for brother Mattie to collect and send McShane in for a clinical finish.

Morgan was called into action soon afterwards, pulling off a superb save to deny Costello, before stepping up to send a 40 metre free between the posts at the other end.

A McShane free sent them in with a 1-7 to 1-5 interval lead, and the same player pushed them further ahead with a point from play within a minute of the restart.

Dublin started the second half with scores from Brian Fenton and Rock to narrow the gap to a single point, but the Red Hands responded magnificently.

Richie Donnelly steered over a magnificent point, before Morgan drilled a 43 metre free over the bar to restore the three points cushion.

Mattie Donnelly fired over another point, but the Dubs had scores from Paddy Andrews and Mannion.

They had trimmed the deficit to two points when Niall Sludden received a black card in the 50th minute, and due to his earlier yellow, Tyrone were down to 14 men for the remainder of the game.

But they conceded just two points as they staged a heroic shut-out against the most lethal attack in the game.

Richie Donnelly was on target again, while McShane and Harte both registered from offensive marks.

And in a pulsating closing period, Tyrone defended heroically, with Hugh Pat McGeary and Morgan putting in vital challenges,

Ben McDonnell made a brilliant block on Ciaran Kilkenny, and Padraig Hampsey executed a diving block as Colm Basquel aimed for the net.